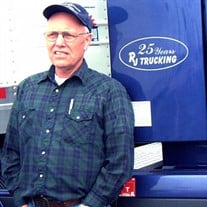 Ruben William Johnston, born on November 1, 1936, went to be with his Lord and Savior Jesus Christ at age 84 on September 27, 2021, at approximately 11:00 p.m. Ruben was born to Cecil and Katie Johnston on November 01, 1936 in Bloomfield, Montana, #9 out of 10 siblings. Ruben was raised on a farm just outside of Richey, MT. In 1956 he met his wife, Mary, at Eastern Montana Bible Camp, while she was the camp nurse. They were married June 9th of 1957. They went to St. Paul Bible College in Minnesota until Ruben was drafted into the Army where he served from December 1958 to December 1960. After completing his military service, Ruben enjoyed working with youth at the Tacoma Alliance Church, Roadside Chapel in Maple Valley, and Winlock Baptist Church. He, also, had a love for flying and got his private pilot’s license and owned a Cessna 172 for a number of years. He flew his family to Eastern Montana to visit relatives on several occasions and enjoyed taking grandkids for rides. Among his other experiences in life, he worked on Boeing aircraft at Boeing Field, Renton and Everett, got his journeyman’s license as an electrician, worked on the Centralia Steam Plant and bought a small farm in Winlock. While in Winlock he started his own electric company called Airway Electric but dreamed of owning a bigger farm, driving truck and being a preacher. In 1977 Ruben bought a 240-acre irrigated farm in the Wenas Valley near Selah, WA. It was from here in 1980 that other dreams came true as opportunities to own his own truck and travel the 48 states became a reality and the little church, they were attending needed a temporary preacher. Ruben drove truck for many different companies until his retirement in 2016. After his retirement, Ruben and Mary became snowbirds, spending the summer months in Yakima and the winter months in Phoenix, AZ, where they enjoyed visiting friends and relatives. The summer of 2019 they spent a month in their motor home at their daughter Jana’s farm overlooking Mt. St. Helen's and Mt. Rainier and a few months at his son’s place in East Selah with a view of Mt. Adams and the pasture of cows he enjoyed so much. As many of his friends would know, Ruben was always on the move. He knew no strangers and preached his sermons and shared his love for Jesus to everyone and anyone who would lend an ear. Other than the many travels in his trucks, Ruben and Mary enjoyed trips to Hawaii, Australia, and a cruise to Alaska. Ruben moved 14 times over the course of his married life and had many friends wherever he was. Ruben is preceded in death by his wife, Mary, on Sept. 14, 2021, his parents and 8 siblings. He is survived by 1 sister, Ella Anderson, his children, William (Carol) Johnston of Yakima, AraJean Johnston of Yakima, and Jana (Alan) Zion of Winlock, WA and 7 grandchildren, Katie, Cindy, Evan, Ben, Kristen, Kelsey & Candi, and 8 great grandchildren.

The family of Ruben W Johnston created this Life Tributes page to make it easy to share your memories.

Send flowers to the Johnston family.