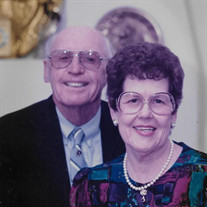 Rose Marie (known as Marie) Guard Handy was born on February 3, 1926 in Rupert Idaho to Rose Ellen and Henry O. Guard. She was number 8 of 9 children. She graduated from High School with the class of 1944 in Rupert. After graduation, Marie moved to San Francisco and went to work for Pan Am. Ten months later, being homesick, she returned to Rupert. Her next move was to Mountain Home, Idaho to work. Her roommate's boyfriend set mom up with a blind date, Bud Handy of Jerome ID. He had just returned from fighting in WWII in Europe. Marie and Bud fell madly in love and married in Nevada six weeks later on Dec. 5, 1945. They settled in Jerome, ID. Their marriage lasted until Bud's passing April 2, 2000. In February 1954 Marie and Bud moved to Sunnyside, WA with their 3 daughters. 2 more daughters were added to the family. In July 1954 they bought the family home at 825 Crescent - 60 years of memories. Upon arrival in Sunnyside, Marie got the family involved in the First Christian Church. They worshiped as a family. Mom taught Sunday School and Dad sang in the choir. Mom was known for her baking. You could smell the aroma of her cinnamon rolls and homemade breads when approaching her home. In later years Marie was involved in the Lower Valley Emblem Club. She traveled with her lady friends to Hawaii, Chicago, Nashville and other places. Those ladies had such fun. Mom sold the family home in 2014 and moved in with daughter Elise and Tom Russell in Orting, WA. Due to not being able to get up the stairs anymore she moved in with daughter Sherry in Moses Lake in March of 2020. Her whole family spent her last days with her, holding her hand, talking to her and listening to her favorite hymns. Marie was loved by all of us. We knew it was her time to join Dad and Kathy. She passed on peacefully, Saturday, July 24th. Survivors are daughters, Sherry Handy of Moses Lake, Lynne Rees (Mike) of Puyallup, Janine Castillo (Max) of Grandview, and Elise Russell(Tom) of Orting, 10 grandchildren, 23 great grandchildren, and 2 great great grandsons She was preceded by her parents and 8 siblings, husband Bud Handy in 2000, and her youngest daughter, Kathryn Rose (Kathy) in 2015. Mom is rejoicing in heaven with Jesus! Well Done Mom! Graveside services will be held on Saturday, August 21st @1:00 p.m. at Lower Valley Gardens in Sunnyside. A celebration of her life will be at the home of Anthony Castillo, grandson.

Rose Marie (known as Marie) Guard Handy was born on February 3, 1926 in Rupert Idaho to Rose Ellen and Henry O. Guard. She was number 8 of 9 children. She graduated from High School with the class of 1944 in Rupert. After graduation, Marie... View Obituary & Service Information

The family of Rose Marie Handy created this Life Tributes page to make it easy to share your memories.

Send flowers to the Handy family.