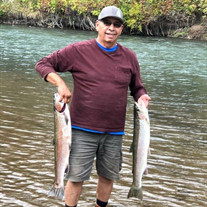 Robert Arambul, 67 passed away on July 10th, 2021 at Astria Hospital in Toppenish, WA with his family by his side. Robert was born November 14, 1953 in Independence , Oregon to Luis Arambul Sr. and Juanita ( Gonzalez ) Arambul. He moved with his parents and siblings to Wapato, Washington as a teenager. He graduated from Wapato High School in 1973. After high school he married Sylvia Castilleja and together they had 3 children, Connie, Jesus , and Alex. Later on in life he met his companion Darlene Dixon and they lived in Granger, WA for the last 11 years. Together they loved to travel, go to the casinos, and visit family. Robert and Darlene had a little dog named Ragan and Robert loved to go on walks daily with him. Robert loved his kids and all his family with his whole heart. His happiest moments were when he had them all together. He recently had gone on a fishing trip with his children and was looking forward to another in October. He also was passing on his love for fishing to his grandchildren. Robert was an active grandfather and was always going to their sporting events, graduations, birthday parties, ect. If there was an activity he was there to support them. If there were two things that everyone knew Robert loved it was fishing and softball. He spent over 40 years playing softball on various teams, and in his recent years on a senior year league team. He was famous for saying “I’m going to retire this year”, but the next year you would find him out on the field. He created a family in the teams he played on, and he could never go anywhere without seeing someone he knew. He was known as “the Big Cat”, “Veterano”, and “The Legend” to those that knew him best in the game. Robert is preceded in death by his parents, Luis Arambul Sr. and Juanita Arambul; his siblings Luis Arambul Jr., David Arambul, Shirley (Arambul) Montez, Mary Lou Arambul, Paul Arambul, Benita “Benny” (Arambul) Treviño, and Sarah Arambul; his granddaughter Savanna Arambul, and step-granddaughter Bailey Dixon. Robert is survived by his companion Darlene Dixon. Children Connie Arambul, Jesus Arambul (Jessie), and Alex Arambul (Brooke); his grandchildren Alex Arambul Jr. (Kaylah), Lilianna Arambul, Jordan Arambul, Elizabeth Grace Arambul, Emmalee Arambul, Aliyah Arambul, and Aviana Arambul; his siblings Mike Arambul, Stella Arambul; his step children Brenda Curfman, Rodney Dixon, and Martin Dixon; and his step-grandchildren Tayller Curfman, Hunter Curfman, Lake Dixon, Lily Dixon, Alex Dixon, and Brenna Dixon; as well as numerous nieces and nephews whom he loved with whole heart and treated like his own children. Viewing will be held at Valley Hills Funeral home in Wapato, Wa. on Saturday, July 17th from 4pm- 8pm. A celebration of life will be held at Wapato Community Center on Sunday, July 18th at 11:00 am. Please send condolences to Valleyhillsfh.com

Robert Arambul, 67 passed away on July 10th, 2021 at Astria Hospital in Toppenish, WA with his family by his side. Robert was born November 14, 1953 in Independence , Oregon to Luis Arambul Sr. and Juanita ( Gonzalez ) Arambul. He moved with... View Obituary & Service Information

The family of Robert Arambul created this Life Tributes page to make it easy to share your memories.

Send flowers to the Arambul family.