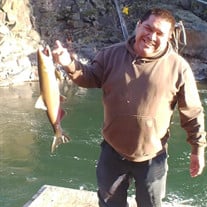 Richard Vic Olney, known by family and friends as Richie, was born April 1, 1975, in Yakima, WA. His parents were Richard Victor Olney Jr. and Mary J. Valdez Olney; he was the youngest in a brood of seven kids. Richie left this Earth on July 27, 2021, at 46 years of age. Richie Olney was a proud member of the Yakama Nation, he spent most of his life in the Yakima Valley, with the exception of a few years in the Seattle/Tacoma area. He grew up on the Olney ranch, along the Marion Drain in Harrah, and spent many of his youthful summers in the mountains, horseback riding, picking berries, hunting, and fishing. He loved camping at the favorite family campsite, a little cabin in the woods, that he helped rebuild, located on Potato Hill, at the base of Mt. Adams. As an adult, he never outgrew his love for the outdoors, which he shared with his children. Education included Harrah Grade School, White Swan Middle School/High School, Yakama Nation Tribal School, and graduation from Madras High School, Madras, OR. He played all the sports, pee-wee division through high school, starting with Yakama Nation T-ball and basketball (which his dad coached), and played high school varsity football. His most exhilarating challenges came from wild horse racing and rodeoing; he “loved this thing called rodeo” and he began participating in Junior Rodeos, in the Yakima Valley, as soon as his age allowed. He moved into the National All-Indian Rodeo circuit, traveled the Pacific Northwest, Montana, Utah, Nevada, New Mexico, winning buckles, monies, and other prizes. Preceding Richie in death are both parents, Richard Olney Jr. and Mary J. Olney, brothers Allan Olney (AO) and Randy (Moon) Olney, more recently family elder/uncle, Ray Olney, and his youngest son Jesse James Olney. Also pre-deceased are all maternal/paternal grandparents, numerous aunts, uncles, cousins. Surviving children include: Zoey, Vivian, Mikayla, Kelijah, and daughter-in-law Kaylynn. Surviving grandchildren are: Adi’kay, Kyra, Malayah, Izayah, and Keilani. He also took under his wing and loved Elsie, Little TJ, Aiden, Buster, Cyrus, and Jayson. He loved being a dad and a grandfather and he adored his kids and grandkids, they were the loves of his life, especially his ‘baby girl’ Zoey, who was always by his side and lit up his world with her sweetness and her beautiful smile. Richie co-parented with Michelle Sconawah of Parker, WA. Besides being Dad and Grandpa, he embraced the role of ‘Uncle Richie’ and spent much time with his nephews and nieces: Lee J, Marchelle, Emily, Jacob, Crystal, Wanee Jo, Waylon, Cody, Kristi Ann, Delvina, Mary, Joshua, Rocky, Kassidee, Coralynn, Velma, Skyler, Shaya, and Whila. Surviving siblings include: sister Vickie Olney-Carl & Marc Carl of Portland; brothers Willy Olney & Shane Olney, both of Harrah; sister Sheri Olney Ray & Willy Ray Jr. of Chiloquin; surviving uncles are: Billy Valdez and Arnold Olney; aunts are Marian Darlene Rabanal, Deanna Skahan, Anna Hogan, Annette King, Paula Olney, Laura Olney, Karen Olney-Pebeahsy, Arlene Olney, and numerous life-long “pardners and brothers” and cousins, great-nieces, and great-nephews. Services for Richie Olney were held at Wapato Longhouse. He was laid to rest at St. Mary’s Catholic Cemetery in White Swan, WA, next to his son Jesse, two of his brothers, both parents, and numerous grandparents and other family members. Faith played a huge part in Richie’s life. He had a lifelong, deep faith, which we know will take him safely home to our Heavenly Father. He was baptized and received his sacraments in the Catholic Church. As an adult, he expanded his faith by joining and attending services in the Native American Church, Shaker Church, Yakama Longhouse, and most recently Tacoma Life Change Christian Church. He was always eager to share his faith or send prayers and messages of hope to family and friends. Richie uplifted everyone with his faith and prayers and his positivity, even after the devastating loss of his youngest son, he continued to send prayers and encouragement to family members, saying “my boy is okay, he’s in good hands.” Richie will be forever missed, he lit up our lives with his love, laughter, ‘baby brother’ antics, and unshakable commitment to family and friends, but we know, in our hearts, that “he’s in good hands.” Rest in peace sweet baby brother.

Richard Vic Olney, known by family and friends as Richie, was born April 1, 1975, in Yakima, WA. His parents were Richard Victor Olney Jr. and Mary J. Valdez Olney; he was the youngest in a brood of seven kids. Richie left this Earth on... View Obituary & Service Information

The family of Richard Vic Olney created this Life Tributes page to make it easy to share your memories.

Richard Vic Olney, known by family and friends as Richie, was...

Send flowers to the Olney family.