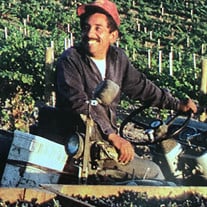 Richard P. Jaime Sr. Richard passed away unexpectedly on July 1, 2021 in Wapato WA. He was born to Frank and Angelina Jaime in Worland, Wyoming March 23, 1935. Richard has left us to join his wife our mother Helen M Jaime, and our brother his... View Obituary & Service Information

The family of Richard Payne Jaime Sr created this Life Tributes page to make it easy to share your memories.

Richard passed away unexpectedly on July...

Send flowers to the Jaime family.