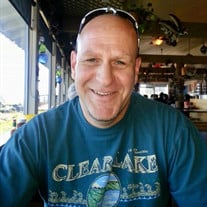 Randall Scott Brown June 10th , 1963 – April 30th, 2021 Randy was called home on April 30th to finally enjoy the peace of eternal life in heaven. He was born in Port Angeles, Wa to Bill and Mary Brown, though the family eventually put down roots in Toppenish, WA, where Randy attended public school. This upbringing began his constant collection of new friends, as Randy never treated anyone as a stranger and could hardly go anywhere without bumping into some old friend along the way. Upon his high school graduation, he enlisted in the United States Navy, assigned to the U.S.S. Maunakea and stationed in San Francisco. Having worked since the age of 16 for Safeway Inc., Randy continued there after his service to his country. Upon his return he also continued his education at YVCC in Yakima. At the age of 22 he battled and ultimately survived a cancer diagnosis. This event challenged him to regain his health and take up running. Over time he entered many races including triathalons and the Yakima River Canyon Run half marathon. During his younger adult years Randy would assist his father with ambulance calls, sometimes driving the ambulance while his father administered medical aid. Randy loved to golf, run, bike, garden, and camp out in the middle of nowhere – though his favorite destination was the Oregon coast. He was especially proud of the vegetable garden he insisted on planting every year. He had several pets over the years, but his buddy was Sugar the Pug, laid to rest last year. At the age of 37 Randy met his life partner and best friend Gail. They were married 3 years later. He took on the role of Father immediately and embraced all the joys that this type of love rewards you with. He loved attending all the sporting events and programs and graduations. Each made him feel very proud and very loved. After working at Safeway, he worked for Frito Lay for 6 years as a route sales specialist and later for Ferrosafe as an applicator riding the rails of BNSF Railway in multiple states – again meeting and making new friends along the way. He returned to Safeway for the past 2 years as a “retirement” job, to slow down and settle into his retirement. He is survived by his wife of 21 years, Gail of Zillah, son Anthony (Gabrielle) Pastores of Lakewood, WA, daughter Sara (Peter) Schilperoort of Yakima, WA and daughter Maria (Josh) Beloit of Puyallup WA. Also his 4 grandchildren, Jayden, Alexis, Parker and Aubrey, and his sisters Debbie Soliz of Yakima and Tammy (Steve) Bangs of Toppenish, along with many beloved nieces and nephews. Randy was most proud to be a husband, a parent and a Papa to his 4 grandchildren. They were the light of his life; he always looked forward to spending time with each of them. Randy is preceded in death by his Mother, Mary Brown and Father, Billy D Brown. Viewing will be on Tuesday May 4th from 4-7 pm at Valley Hills Funeral Home in Zillah, with Services there also on Wednesday May 5th at 1 pm. For those that wish to make a donation on Randy’s behalf, please consider the Multiple Sclerosis Society or the Yakima Humane Society.

The family of Randy Scott Brown created this Life Tributes page to make it easy to share your memories.

Send flowers to the Brown family.