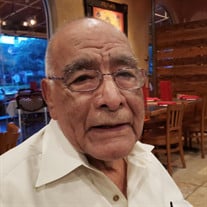 On Tuesday, February 2, 2021, Phil Gonzales, loving husband and father, passed away at the age of 92. Phil was born on June 9, 1928 in Minatare, Scottsbluff County, Nebraska to Victor and Lus (Castillo) Gonzales. As the family grew, they moved to Worland, Wyoming and worked in agriculture. They relocated once again in the 1940’s, making their home in Wapato, Washington. In the early 1950’s Phil grew restless in Washington and flew north to Alaska to explore new opportunities. He initially found employment at the Usibelli coal mine in Healy, then at Clear Air Force Station. He eventually settled in Fairbanks, where he worked in Civil Service at Eielson Air Force Base. Phil met his future wife Angelina while on vacation in Mexico. They married in her hometown of Guadalajara, Jalisco in 1969 and she moved to Fairbanks where they raised their two daughters. Phil had a long, 30-year career with the power plant at Eielson Air Force Base. After he retired, he and his wife Angelina moved to Houston, Texas to be close to their children and to enjoy the year-round warm weather. Throughout his life, Phil valued physical fitness as an integral part of his routine. He enjoyed boxing, jogging and staying active by working on home improvement projects. One of his favorite activities in his golden years was traveling around the world with his family. He visited many countries such as Italy, Spain, Portugal, France, England, Germany, Austria, Hungary, Czech Republic and Argentina. Phil was preceded in death by his father, Victor, his mother, Lus, siblings Lupe, Jerry, Molly, Phyllis, Gloria and Johnny, and his wife Angelina in 2018. He is survived by his daughters Marcia and Monica, his brothers Chris, Paul, and Joe and sisters Hope, Jessica, and Dolores along with his many cousins, nieces and nephews. Phil was regarded for his generosity, patience, and support. In lieu of flowers, the family requests that you donate to your local charity or food bank in his honor.

On Tuesday, February 2, 2021, Phil Gonzales, loving husband and father, passed away at the age of 92. Phil was born on June 9, 1928 in Minatare, Scottsbluff County, Nebraska to Victor and Lus (Castillo) Gonzales. As the family grew, they moved... View Obituary & Service Information

The family of Phil Gonzales created this Life Tributes page to make it easy to share your memories.

Send flowers to the Gonzales family.