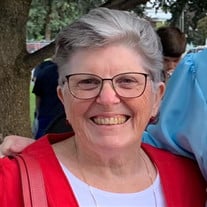 Paula Fields (Varco) Schwartz 77, a lifelong resident of Yakima died peacefully August 20, 2021. Paula was born August 1, 1944 in Yakima, Washington to Lloyd J. and Else F. (Fields) Varco. On September 8, 1962, Paula Married William Schwartz and shared many happy and devoted years together. They enjoyed taking their three children camping and going on trips to Seaside, Oregon. Devotion to The Lord Jesus Christ was an integral part of Paula’s life. Paula worked as a unit secretary for McKesson and Robbins; then as a legal secretary for Gavin, Robinson, Kendrick, Redman and Mays. She attended college at Yakima Valley Community College and subsequently graduated from Central Washington State College with a major in English, minor in history and minor in education. She taught fifth grade and middle school P.E. in West Valley School District for three years and then third grade through junior high at Union Gap School District for 28 years. While teaching she was the first recipient of the Christa McAuliff Excellence in Education award for the state of Washington, also known as the teacher of the Year for the Sate of Washington. She was written into the book Outstanding American Educators as well as written into the Congressional Record as an outstand educator for the United States. During her last year of teaching, she was nominated for the Walt Disney Teacher of the year, but had to decline as she was retiring that year. During her many years of teaching she believed each and every student was a vital and necessary part of our world, and had special and unique gifts to offer. She used to say that once a student crossed the threshold of her classroom, that student belonged to her for the rest of that student’s life. Seeing her students outside of the school setting brought her great joy and interested in their wellbeing. Every student was important. Paula was a member of the Bel Canto and was privileged to travel to Australia and New Zealand. Truly a memorable event! She was also a member of P.E.O. Her “sister” were so very important to her. Their love, support and compassion were unmatched. During retirement, Paula began to quilt (enjoying many quilt retreats), garden (her mother’s ‘Memory Garden” was one of her greatest joys), and read the books she never had time before to read. She was preceded in death by her beloved parents, Lloyd James Varco and Elsie F. Varco; her kind and loving sister, Marta Lynn (Varco) Burkholder; her sweet sister-in-law, Janet (Gano) Varco; her niece, Kaarin Swanson, and her nephew, John Burkholder. Paula is survived by her husband of 58 years, William Schwartz and their three children and spouses: Scott Christopher Schwartz (Karen); Laural Ann Wolff (Geremy); and Robert William Schwartz (Christina). Paula is also survived by her grandchildren: Taylor, Tyler (Angelique, great grandsons, Ayden and Ty), Spencer, Josie, and Grace. Also surviving her is her sister, Penny (Varco) Leonard (Perry) and brother, Stephen Varco and brother-in-law, Don Burkholder as well as numerous nieces and nephews. A very special “Thank You” goes to Dr. Albert Brady and Staff for their compassion, devotion to caring for their patients and terrific senses of humor. Dr. Brady and his staff fostered, nurtured and created a room of compassion, kindness, and hope. After Dr. Brady closed his practice, Paula was most fortunate to go to Northstar Lodge where she was very blessed to have Dr. Siva Mannem as her oncologist. What a brilliant mind! Along with Dr. Mannem, Paula was so very fortunate to be surrounded by such compassionate members of Northstar as Sara Wisner and Lara. They have devoted their lives to helping others with thoughtfulness and kindness. A Graveside Memorial Service will be held Thursday August 26, 2021 at 1:00 PM at Terrace Heights Memorial Park, 3001 Terrace Heights Dr, Yakima, WA 9890. Please visit www.ValleyHillsfh.com to share a memory or condolence with the family.

The family of Paula F Schwartz created this Life Tributes page to make it easy to share your memories.

Send flowers to the Schwartz family.