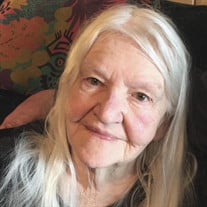 Our loving Mother left this world and went to be with the Lord on Friday, March 5, 2021. She was surrounded by her adoring family. She was born on April 3, 1931 in Decatur Arkansas to Ralph and Mittie Della Wood in a little log cabin with a dirt floor, no electricity or running water. Early in her life, she learned to sew, and many times would crawl underneath the table with a kerosene lamp and work at perfecting this craft that she loved all throughout her lifetime. Fabric being scarce in that era, she cleverly used flour sacks to fashion clothing. Even in her youth, her love for children ran deep and in her creativeness Joyce would use any available materials to make baby dolls. In fact, once she even used a cucumber with toothpicks for its arms and legs. In earnest she prayed that when she returned, it would be a real baby and was filled with disappointed when her prayers were not answered. Life presented her with many challenges, but Joyce valued integrity, honesty and hard work and never wavered from those things, even through the tough times. She was the most honorable woman we have ever known. In 1964 she moved to Grandview, Washington where she built a new life for her 8 children through perseverance and determination. Being the resourceful woman she was, she found ways to provide for her children within her meager budget. We remember the many times we picked up apples, pears and other fruit which had fallen on the orchard floors, as well as going to the potato fields after the harvest and gleaning the potatoes that were left lying in the freshly plowed dirt. Life then had many ups and downs, but Joyce remained determined to give her kids the best life she could, using her sewing, gardening and cooking skills to acquire necessities & fill her home with love and lots of good, home grown food. She worked tirelessly from sun up to sun down. Joyce moved to her home in Granger in 1975, and soon after married her late husband W. Glen Schick. Not everyone can say they lived out their lifelong dreams, but our Mother did. As a young woman, she desired to help children who were in need. After marrying Glen, together they opened their hearts & home and began their 40+ year journey of foster parenting. Joyce had an open door & loving heart for children needing love and a safe, caring home. There were many highs and a few lows along the way, but the passion in her heart for the children remained. She cared for many children throughout the Yakima Valley and was well known and respected at DSHS. In 2005, Joyce was recognized by former Governor Christine Gregoire, as well as the Region 2 DCFS for her outstanding service as a foster parent. We may never know the full impact she has had on the many little lives that passed through her home, but just knowing that she was so loved & respected by so many makes us extremely proud that she was our Mother. We’ve never met anyone who could say anything but amazing things about her. She was a beautiful person who invested everything she could into the lives & future of those she loved but was reluctant to have anyone trouble themselves on her account. Her family experienced the kind of pure love & kindness that would pierce your heart and spread like wildfire. Every morning was another day for her to help someone & to do what she enjoyed. Though the earlier years of her life were sometimes difficult, she learned to turn anything she touched into gold and held onto it as if it were. She was a very special Mother, Grandmother and friend and we adore her. She is survived by her children: Teresa Schlottmann, Bill Lawson (Pat), Debbie Skinner, Gwen Lawson(David), Shelby Pettit(John), Kevin Lawson(Tracie), Robin Abrams(Andy), Brandon Schick, Patty Gomez, Yvonne Gomez, Steve Gomez, Robert Gomez, Richie Gomez, Chance McKenzie, Jason Gordon, Lori Plesich(Dennis), as well as many grandchildren, great-grandchildren, and great-great grandchildren. She is preceded in death by her husband Walter Glen Schick, her daughter Cynthia Lawson, stepson Ralph Lyons, her parents & siblings. A note of thanks to the staff at Heartlinks Hospice in Sunnyside for their kindness & gentle care of our Mother. Services will be held at Valley Hills Funeral Home in Zillah, Wa. Viewing is Thursday, March 11th from 5 pm-8 pm. Funeral service is on Friday, March 12th at 11:00 am, followed by a graveside service. Please bring a mask.

Our loving Mother left this world and went to be with the Lord on Friday, March 5, 2021. She was surrounded by her adoring family. She was born on April 3, 1931 in Decatur Arkansas to Ralph and Mittie Della Wood in a little log cabin with a... View Obituary & Service Information

The family of Norma Joyce Schick created this Life Tributes page to make it easy to share your memories.

Our loving Mother left this world and went to be with the Lord...

Send flowers to the Schick family.