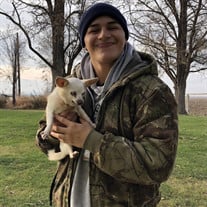 Nikolas Garcia Garza, commonly known as “Niko” passed away on September 20th, 2021. He was born in Toppenish, WA on January 17th, 1999. Nikolas was raised in Granger, WA and is the son of Alejandro Rene & Cynthia Garza. Nikolas is survived by his siblings Rebecca, Jason, Jaime (Lolo), Daniel (Boone), Adrian (Hunny), Alex (Nay-Nay) & Reesah, along with his nephews and nieces Armando (Mandito), Genesis (Genny), Dominic (Duck), & Adriah, as well as his grandparents Guadalupe & Celia Garza and Ramon & Juanita Rodriguez. He is also survived by countless cousins and friends. He will be preceded in death by his longtime dog Bitzy. It would be an understatement to describe Niko as “hardworking”, as he worked TSA at the Yakima Airport, and also for Walmart and Cabela’s. This fall he had also begun his academic studies as a full time online student at Purdue University. Sports played a heavy role throughout Niko’s childhood, as it was clear he would grow up to be a gifted athlete from a very young age. He is fondly remembered by the youth basketball and wrestling communities that exist within the Yakima Valley, and would evolve to become a star athlete at Granger High School, where he wrestled, and played football & basketball. It speaks volumes to the athlete Niko was noting his All League Basketball Selection as a sophomore, while only two calendar years later being a member of the Granger High School 2017 State Championship Wrestling Team. Niko also loved breakdancing, working out, and hanging out with family & friends. He enjoyed watching the NBA, NFL and UFC in his downtime. He rooted for the Dallas Cowboys and idolized athletes LeBron James and George St. Pierre. His laugh will be remembered by, and always unique, to all who ever knew him. His smile could be picked out from a sea of pedestrians and his presence in the room was always felt. A natural leader and source of inspiration, Niko leaves a legacy to be lived through his loved ones like none other. A viewing will be held for family and friends to attend at Valley Hills Funeral Home in Sunnyside, WA from 2:00 to 7:00PM on Friday September 24th, 2021. On Saturday September 25th, 2021 at 9:00AM will be a funeral service in honor of Niko, also at Valley Hills Funeral Home, followed by burial at Lower Valley Memorial Gardens at 11:00AM.

Nikolas Garcia Garza, commonly known as &#8220;Niko&#8221; passed away on September 20th, 2021. He was born in Toppenish, WA on January 17th, 1999. Nikolas was raised in Granger, WA and is the son of Alejandro Rene & Cynthia Garza. Nikolas... View Obituary & Service Information

The family of Nikolas Garcia Garza created this Life Tributes page to make it easy to share your memories.

Nikolas Garcia Garza, commonly known as “Niko” passed away on...