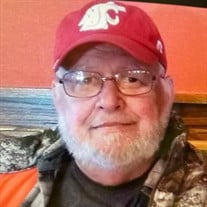 Max Allen Zackula, 68, beloved husband, father, grandfather and great­ grandfather, (Papa Max), passed away peacefully at his home in Mabton, Friday, September 10, 2021, surrounded by family. He had fought a courageous battle with cancer since October 2018. He was the youngest of four children: Stephanna, Phillip and Judy. Or so he thought....at 13 years of age he became a BIG brother to a sister, Lori… and baby made 5! His father, working for the Boeing Company transferred often. They lived in Wichita, Kansas, then attended school in, Niagra Falls, New York; Roswell, New Mexico; moved to Edgewood, Washington, and the last move was to Kent, Washington. It was when he attended Edgemont Elementary/Junior High that he would meet his future bride, Karen Wahl. Max and Karen were “sweet” on one another from 7th grade through High School. He attended Sumner High School, then moved to Kent where he attended Kentridge High School. Max and Karen married in 1970 and made Puyallup-Graham-Tacoma and McKenna their home for 20 years before moving to Eastern Washington. Max was a hard worker and never turned away extra work when it came his way. In junior high school he worked evenings, catching chickens, picked berries, mowed lawns, then went to work at the “Drive-In Theatre” in Kent. Once married, Max continued working the ‘’Drive-In” in Kent, took a second job at a glove-factory in Tacoma where he worked part-time alongside his grandfather. He learned the ins and outs of boiler operations. He gradually worked into the custom cabinet business, learning from the best, Karen’s four brothers. There he thrived on learning the business. The opportunity came up to work in a new door shop next door, he went on to learn even more of the woodworking business and enjoyed his work. Weekends were spent mostly with family; hunting, fishing, jeeping, camping, playing on a company baseball team and the beginning of yet another sport he liked best, coaching his son in “little guy wrestling.” Max was a member of the Elks, Eagles, and the NRA. In 1990 when Max and Karen moved to Eastern Washington, they made their home in the Mabton-Grandview area. There he and a former co-worker from Puyallup and good friend, Mike Britton, combined their woodworking skills and became partners in BC Cabinets (located in the Mabton/Sunnyside area). Working close to home he was able to spend extra time with his son Larry that attended Mabton schools. He was proud of this and could be found many times at football and wrestling turnouts, as well as games and matches at home and out of town. As well, their daughter Tammy, became an accomplished woodworker and came to work with the “old guys.” She had also learned her work ethics and skills from the best, her father and Mike Britton, as well as her uncles. Years later, Max worked for Western Recreational Vehicles, in Union Gap. He began as a shop employee, worked his way up to Service Manager and eventually a Warranty Service Manager. He was with Western R.V. for 17 years before the business closed. It was then that he began working for Mercy Housing, a business owned by Nuns, whom he had tremendous respect. He was a Maintenance Supervisor in Wapato and Mabton and worked for Mercy Housing almost five years before a spinal injury left him disabled. He worked hard at his job, and he worked to do the best especially for his customers. He took pride in teaching others as well as learning from others, whether it be from a supervisor, a co-worker or even teaching good work ethics to his children and/or their friends. It was important to him that they become the best they could be, work hard and enjoy what they’re doing at the same time. He had a love for pets. He trained numerous hunting dogs and in the past three+ years, his dog Daisy, a Min-Pin Chi and his 18-pound cat, Boogher. Max was a good storyteller and listened well, especially to those that shared their past experiences. His grandfather, from Hungary, his father and six uncles, most that had seen war once or twice. He watched the History Channel, Smithsonian Channel, Animal Planet, Sci-Fi, and the Big Bang Theory. He was always quick to say, “Thank you.” In his last few days when he was unable to speak, he used ‘’sign language.” He was “witty” to the end. Heaven has gained one heck of a good angel! That’s a “True story”! He is survived by his wife of 51 years, Karen Zackula, Mabton; daughter, Tammy Zackula (John Allessio), Walla Walla; son, Larry Zackula (Jessica), Kennewick; granddaughters, Krystal Ostapow and Haley Brown; grandsons; Ty and Gage Leyendekker (Jordan), Zander and Zane Zackula; great-grandchildren; Hayden, Braydon, Percy, Bucklee and Ambrose; and a sister; Lori Wrout (Jeff), Ventura, California. He is preceded in death by Steven Zackula, father; Fern Zackula, mother; Stephanna Chambers, sister; Phillip Zackula, brother; Judy Brown, sister. A Celebration of Life will be held for family and close friends on November 13, 2021, in Kennewick. It will be held outdoors. Further details will be forthcoming. In lieu of flowers, we encourage you to share any fond memories/stories with family and friends on Max’s Facebook page. Those wishing to sign Max’s memorial book may do so at www.valleyhills.com. Valley Hills Funeral Home in Sunnyside is in care of arrangements.

The family of Max A Zackula created this Life Tributes page to make it easy to share your memories.

Send flowers to the Zackula family.