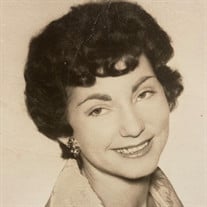 Martha Genevieve (King) Gabbard went to sing and dance with our Lord Tuesday August 31, 2021. Martha was born December 10, 1930 to Ira And Audrey (Bennefield) King in San Antonio, TX. Martha was in Texas until she met her lifelong husband Albert “Leroy” Gabbard becoming a Navy wife on December 2, 1955 moving her to Norfolk, VA. When Leroy retired from the Navy in 1966 they moved their family to his hometown of Selah, WA where they built their lifelong home. Martha held various jobs, but primarily made her life as a homemaker to their 6 children. Even when 5 of those children were raised, she devoted the rest of her life to caring for their youngest son with down-syndrome. She enjoyed music, singing, dancing, playing puzzle games, playing bingo, and you could even catch her riding 4-wheelers with the grandkids at times. She played guitar, played piano, and was always known as the “cool grandma” having a video game room back in the Atari, Nintendo and Sega days. She could play better than the kids and she would laugh at them if they even tried to beat her scores. She also enjoyed cooking and made the best enchiladas in the world. In earlier years she would go back to her home-state of Texas to visit often. She was a very proud “Texan” and she made sure everyone knew it! Martha is survived by her children Carol (Frank) Mintz of The Villages, FL, Dan (Linda) Gabbard, Barbara (Ed) Schmidt, and Albert Gabbard JR all of Selah, WA, and Michael Gabbard of Seattle, WA, 8 grandchildren, 21 great-grandchildren, and 2 great-great grandchildren, her sister Evelyn Pine of San Antonio, TX, her brother Ernest King of Texas, 6 brother in-laws and their wives, and many, many, nieces and nephews and extended family. Martha was proceeded in death by her parents, Ira and Audrey King, her husband Leroy Gabbard, her daughter Glenna Lewis, and her great-granddaughter Kaitlynn Chouinard. A celebration of life will be held Saturday September 11, 2021.

Martha Genevieve (King) Gabbard went to sing and dance with our Lord Tuesday August 31, 2021. Martha was born December 10, 1930 to Ira And Audrey (Bennefield) King in San Antonio, TX. Martha was in Texas until she met her lifelong husband... View Obituary & Service Information

The family of Martha Gabbard created this Life Tributes page to make it easy to share your memories.

Martha Genevieve (King) Gabbard went to sing and dance with our...

Send flowers to the Gabbard family.