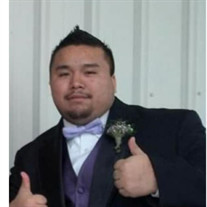 Marcus Gene “Kvnhvlwe” Marsden, was born April 22, 1988 to Chumila Hill and Patrick Marsden in Ketchikan, AK. Tragically, Marcus and his younger brother Matthew were involved in a car wreck in which they both died at the scene. Marcus was a member of the Tsimshian Nation, as well as a descendant of the Yakama and Creek Nations. He was a resident of Wapato all of his life. As a child Mark and his younger brother Matt were rambunctious boys. For 22 days, they were the same age and were often mistaken for twins. He played Grid Kid football for Wapato and Wapato High School. He graduated from Pace High School in 2007. Marcus attend Haskell Indian Nations University and Yakima Valley College. Although it was rare for Mark to drop a beat for you lately, he was known for his beat boxing abilities. He collected comic books and was a fan of the “Art of War” series. Also, he enjoyed passing time by playing video games. Marcus enjoyed a good steak and would chef up a fancy meal from time to time. He took pride in helping take care of his family. The days that his family resided in Adam’s View Park; Mark could be found at the Martinez residence helping break horses. This love for animals continued as he worked for the Yakama Nation Wildlife program. One job duty that he particularly enjoyed was taking care of the buffalo. He worked for Legends Casino as a deli cook. Mark, would show his skills he learned to make a tasty burger for his family. At the time of his passing, he was employed at Yakama Legends Casino as an EVS representative. Marcus was an Oklahoma Sooners and Seahawks football fan. Last but not least, he did not have any children of his own but had a soft spot for children and loved all of his nephew and nieces dearly. Marcus is survived by his father Patrick Marsden of Metlakatla, AK. His two sisters; Lahoma Doublerunner (Kyle Hawkins), Winona Marsden and sister in-law Nicole Marsden. Aunts; Sharon Hill and Espoke (Stuart) Jim. Nephews Caleb Marsden, Kyren Doublerunner, Sebastian Watlamet, Odyssey Marsden, and Joey Marsden. Nieces Lynnita Hill, Melea Marsden, Layla Watlamet, Hazelmae Hawkins and great-niece KaTiya Stewart. Great-Aunt Phyliss Littlebull, Rosemary Miller, Shirley Criqui, and Matilda Smiskin. Great-Uncles; Stanley Miller, Melvin (Mary) Miller and Harry (Jeanne) Smiskin. Marcus is joined in death by his brother Matthew Marsden. He is proceeded in death by his mother Chumila Hill. Brother William Hill. Maternal Grandparents Joe and Helen Miller Hill. Paternal Grandmother Mae Marsden. Aunts; Hazel and Madeline Hill. Uncles; David and Wilburn Hill. Cousins Melina Hunt, Nikki Bill, and Margaret Hill. The family of Marcus would like to send a heartfelt thank you to all who have step up and helped out in our time of need. Marcus was loved by many and will be greatly missed. Fly high brother. Attowishamush!

Marcus Gene &#8220;Kvnhvlwe&#8221; Marsden, was born April 22, 1988 to Chumila Hill and Patrick Marsden in Ketchikan, AK. Tragically, Marcus and his younger brother Matthew were involved in a car wreck in which they both died at the scene. Marcus... View Obituary & Service Information

The family of Marcus Gene Marsden created this Life Tributes page to make it easy to share your memories.

Send flowers to the Marsden family.