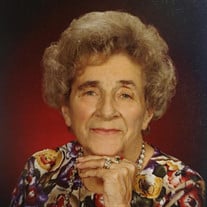 Lorraine Cecelia (Cook) Gorski 4/21/1931 to 3/3/2022 Lorraine Cecelia (Cook) Gorski passed away peacefully in the comfort of her home surrounded by family March 3, 2022 in Toppenish, WA at the age of 90. Lorraine was born April 21, 1931 to Helen and George Hauk in Roseburg, Or. Lorraine lived with her family in the Harrah area since the age of 2. She attended Harrah Elementary and graduated from White Swan High School in 1948. In 1949 she married her first husband Arlie Cook. In 1965 she married her second husband Jerry Gorski. After her second husband had passed she then spent many joy filled years with her companion Jesse Meade. After working numerous jobs Lorraine retired in 1984 and became a homemaker. Lorraine's hobbies included playing cards, fishing, restoring furniture, and gardening. She enjoyed spending time with her loved ones, especially her grandchildren, family and longtime friends. She was a member of the Fraternal Order of Eagles in Yakima, WA and was a member of the VFW in Yakima. Lorraine is preceded in death by her parents George and Helen Hauk, husbands Arlie Cook, and Jerry Gorski, companion Jesse Meade sons Bruce Cook, Bob Gorski, and her sister Francis Neeley. Lorraine is survived by her 3 daughters Sherry McCord, Renee Isadore (Tom), Arlene Goodall, 3 sons Stuart Gorski, Mike Gorski, Patrick Gorski, sisters Sheila Whitaker, Anna Johns, Bonnie Anderson, Gloria Wright, 31 grandchildren, 56 great grandchildren, and 2 great great grandchildren. Viewing and Rosary will be held at Valley Hills Funeral Home in Wapato, WA on March 7, 2022, with the viewing to start at 5:00pm and Rosary to start at 7:00pm. Mass of Christian Burial will be held at St. Peter Claver Church in Wapato, WA March 8, 2022, at 11:00am with burial to follow at Reservation Community Memorial Park Wapato, WA. Please send condolences to Valleyhillsfh.com

The family of Lorraine Cecelia Gorski created this Life Tributes page to make it easy to share your memories.

Send flowers to the Gorski family.