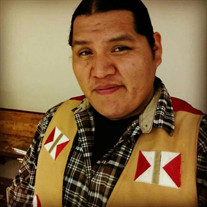 Loren Alan Selam Sr. also known by his Indian name We Ya Nin tha passed away on Friday, March 19, 2021 in Seattle, WA. He was one of the rarest types of person you could ever hope to meet. He was a teacher of our traditional ways of life. He helped many understand the Yakama Nation Culture and Values. He always stood accountable for his actions and words. He spoke the Yakama language on the wash. He was also incredibly open minded and believed education was extremely important, he was a student Heritage University. We Ya Nin tha, took the time to acquire the knowledge of our elders to pass down to his children and anyone else that was willing to learn. He was an avid hunter and fisherman. He danced and lead on the wash. He had a huge heart and always attended to his people. He truly followed the interpretation of his name by traveling and getting to know our relatives near and far. He participated in the powwow circle, attending ceremonies and being respectful to all ways of life. He was a strong believer within the Yakama Nation faith and prayed for all people through our Xyach. Our pusha was a very humble man. He had great love and respect for people from all walks of life. He very much honored himself and took care of a bell. He was very sociable and outgoing. He always had a smile on his face and had a laugh you could hear from rooms away. He always had time to uplift your spirit and put a smile on your face. He will be greatly missed by many. Loren is survived by his wife and children: Shyanne Pinkham “Peopeoxaixai”, Shauntel Ganuelas “Skonithla”, Loren Selam Jr. “Tkwanichupit”, Adriana Selam “Snix”, Eric Selam “Tush”, and Bella Tai Selam. Parents: Lonnie and Theresa Selam, siblings: Patricia Selam, Lonnie Selam, Jr, Laveda Case, Tracy Selam, and Shelian Selam. Aunty Mom Rosalie George, brothers: Joe Aleck Jr, Jeremiah Aleck, and Jason Aleck. Proceeded in death by his daughter Shaniah Pinkham “Showshowli”, grandson Bryson Vigil. Paternal Grandparents: Howard and Elsie Selam. Maternal Grandparents Tex and Lorraine George. Nephew: Terrance Hawk Selam. Grandparents: Tom & Marie Albert, Jimmy Selam, and Isaac Albert. Uncle’s: Tush Selam, Lindsey Selam, Terry Selam, and John R George. Uncle Dad Joe Aleck Sr. Dressing will be on Monday, March 22, 2021 at 9:00am at Toppenish Longhouse followed by overnight services officiated by George Lee. Undertakers will be Aaron Paul and Richard Sam. Burial will be on Tuesday, March 23, 2021 at 8:00am at Toppenish Creek Cemetery.

Loren Alan Selam Sr. also known by his Indian name We Ya Nin tha passed away on Friday, March 19, 2021 in Seattle, WA. He was one of the rarest types of person you could ever hope to meet. He was a teacher of our traditional ways of life. He... View Obituary & Service Information

The family of Loren Alan Selam Sr. created this Life Tributes page to make it easy to share your memories.

Loren Alan Selam Sr. also known by his Indian name We Ya Nin...

Send flowers to the Selam family.