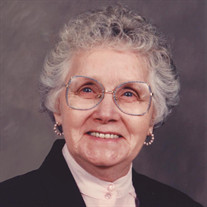 Lola Bishop Obituary Lola Jean (Roberts) Bishop, 96, passed away peacefully in her sleep November 26th, 2021, at her home in Granger. Lola was born in Texline, Texas in 1925 and lived the majority of her life in the Yakima Valley and the Columbia Basin in Washington State. She was the 3rd child of 9 children and the first daughter born to Frank and Nora Roberts. She is survived by her brother Burr Roberts and two sisters, Nita Lester and Rosalee Clavey. All six of Lola’s children, Warren McCullough, Dennis Bishop, Larry Bishop, Colleen Waymire, Brenda Hodson and Randy Bishop feel blessed to have had such an angelic mother. Although she contracted polio at the age of 2, which caused fairly severe deformities in her feet, she survived with resilience. Being the oldest daughter in her family she spent many early years helping raise her siblings under her mothers tutelage during the depression years. Her family was very poor and she learned how to make almost anything out of nothing. She learned valuable skills like cooking, sewing, crocheting, painting, upholstering and various other crafts and was happy to share her talents with others.  After leaving home at age 16 she then worked as a ranch cook for hired hands on various ranches. She worked at the Bug House tying flies and waitressing at local cafes. She was a hard worker. Lola met Bill shortly after he returned from the War in Europe and was married soon after. Bill was always her knight in shining armor, although he wore a cowboy hat instead of a helmet. She enjoyed horses and was part of a horse club that performed at various fairs and other events. Their horse and rider drill team performed square-dance routines on horseback. She participated in numerous garden clubs, worked as a volunteer for 25 years at the Grant County Fair and earned ribbons for her floral designs and baked goods. Her formal education stopped in the 10th grade as a 16 year old and in her 60’s she went back to school at Big Bend Community College in Moses Lake and successfully completed her GED. She said this was one of her most cherished accomplishments. She wrote an autobiography about her early growing up years called, “The Rugrats of Archuleta County” which was published in 1986. It’s a fun read about her family during the Depression.  She had a wonderful life filled with her devoted husband, 6 children, 16 grandchildren, 32 great-grandchildren and 3 great-great-grandchildren. She left a great legacy, one worth emulating.

Lola Bishop Obituary Lola Jean (Roberts) Bishop, 96, passed away peacefully in her sleep November 26th, 2021, at her home in Granger. Lola was born in Texline, Texas in 1925 and lived the majority of her life in the Yakima Valley and the Columbia... View Obituary & Service Information

The family of Lola Jean Bishop created this Life Tributes page to make it easy to share your memories.

Send flowers to the Bishop family.