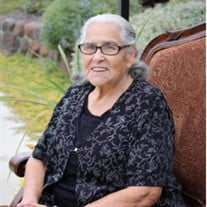 Wapato – Lidia G. Garza of Wapato was called home on February 28, 2021 in the presence of numerous family members. Lidia was a loving and caring wife, mother, grandmother, great grandmother, and great-great grandmother and always placed others before self. Lidia was born on November 6, 1936 to Rev. Canuto and Maria Garza in San Benito, Nuevo Leon, Mexico. Lidia and her family moved from San Benito shortly after to Garza Gonzalez, Nuevo Leon, Mexico making that their home town. At a young age, Lidia came to the United States with her parents in search of a better and more prosperous life. Lidia, her parents, and her siblings were seasonal agricultural workers throughout the west and Mid-west states. In 1953, a young, handsome, and charming man, by the name of Jeremias Garza, fell in love with her beauty, her grace, her humility, her meekness, and most of all her reverence and love of God. On January 26, 1955, in a small town called Garza Gonzalez, the two married and became one. Whether the two were at church, family gatherings, social events, shopping, and or even hauling spuds in the Columbia Basin area, Jeremias and Lidia were truly inseparable. The two were faithful to each other in marriage for Forty-six (46) years and 11 months, before her husband’s passing in 2001. Lidia was blessed with seven wonderful children, twenty-three (23) grandchildren, sixteen (16) great grandchildren, and one (1) great-great grandchild. Her family was truly her pride and her joy. She loved each and every one of them dearly. Lidia was very caring, loving, and witty at times. She had quite a sense of humor and would make us laugh and cry at the same time. The older she got, the funnier she would be. She loved to crochet, cook, garden, read her Bible, and most of all sing… especially with her husband. Many times her children could hear her and her husband singing gospel hymns late into the evening hours. Lidia was a faithful member of Wapato’s Spanish Assembly of God church for approximately sixty (60) years. Over the years, Lidia served in various positions. She loved the Lord with all her heart. Her favorite verse was Psalms 1:1, “Blessed is the man who does not walk in the counsel of the wicked or stand in the way of sinners or sit in the seat of mockers. But his delight is in the law of the LORD, and on his law he meditates day and night.” Lidia is survived by her seven (7) children Jeremias Garza Jr. (Phyllis), Elizabeth Galindo, Hector Garza Sr. (Rachel), Ezequiel Garza Sr. (Cynthia), Everardo Garza Sr. (Leti), Enedina Alejandre (Jose), and Estela Garza. Lidia is also survived by her siblings David Garza Sr., Rebecca Valdez, Samuel Garza Sr., Ruben Garza Sr., Nache Garza, and Raquel Gomez. Lidia is preceded in death by her husband Jeremias Garza Sr., grandson Everardo Garza Jr., and her sister Sara Garza. A Celebration of Life service will be held on Thursday, March 4th at 7:00 PM at Stone Church, 3303 Englewood Ave, Yakima, WA 98902. There will be a viewing from 5:00 – 6:30 PM prior to the service on Thursday. Funeral services will be held Friday, March 5th at 10:00 AM at Templo Cristiano, Assembly of God church, 501 W 2nd Ave. Wapato, WA. 98951. Concluding services and burial will be held at Reservation Community Memorial Park west of Wapato.

The family of Lidia Garza created this Life Tributes page to make it easy to share your memories.