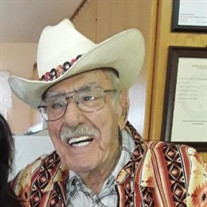 Lee V Godfrey, of Yakima, passed away peacefully on May 29, 2021 at the age of 92.  He is survived by his 3 children, David R. Godfrey of Colville, WA; Susan E. White of Yakima, WA and Mark D. Godfrey and his wife Bonita Godfrey of Zillah, WA. He is also survived by 6 grandchildren and 10 great-grandchildren. He is preceded in death by his wives: Lilivon D. Urquhart Godfrey, Virginia G. Connell Godfrey and Joyce E. LeMieux (Godfrey) Stanley. Lee was the son of Melva and Lee S. Godfrey. His father passed when he was 3 months old and was raised by his Grandmother and Grandfather, Ben and Annie Sainsbury, and grew up in the Yakima Valley alongside his aunts and uncles, as their sibling. In 1945 Lee married Joyce LeMieux and together they raised 3 children. During this time Lee went to College in San Francisco, while working full time as a night manager at a local Dime store. He Graduated in 1959 top 5th of his class. Lee and Joyce moved to Pacific Grove, CA where he went to work for Paul Mortuary for 2 years. The Bishop of his ward came to him and asked him to be a foreman for his construction firm, and as the pay was considerably more, Lee took the position and received his General Contractors license. Three year later he was called to serve his church on a building mission. He sold everything and took his family to Buenos Aires Argentina in 1964-1967. Lee and Joyce divorced after 22 years and within a couple years he met Virginia Connell, who lovingly agreed to marry him. Lee and Virginia, through hard work and dedication, founded and built Valley Hills Mortuary in Zillah and Sunnyside, which they later sold and retired from in 1991. Lee was an avid musician and always loved to sing. At 40 he taught himself to play piano, and moved onto teach himself guitar, accordion, banjo and several other string instruments. Lee would sing any chance he had at church. Upon his retirement he dedicated his time to music.   He played with the Old Time Fiddlers in Yakima. They began wintering in Yuma after he and Virginia retired and was given the nick-name “Digger” by his musical friends, and it stuck. After a long illness Virginia passed. They had been married 40 years. Again, Lee was blessed with a helpmate, Lilivon to share in his life and they married in 2012. They wintered in Quartzsite, Arizona where he continued his long-time friendships with the musicians in their area. He had great memories of his many years in Arizona and made so many wonderful lifelong friends and acquaintances in the musical community. It is with great love, appreciation and respect for our father that we close this chapter of his life on earth. Now is his time for a joyous and loving reunion with his family, friends in the presence of Heavenly Father. We have loved him dearly and will miss his daily presence. Funeral Services will be held Wednesday June 2nd at 11:00 am at Church of Jesus Christ of Latter Day Saints in  Zillah. Graveside service to follow in Zillah Cemetery. Visitation will be held Tuesday June 1st from 4pm-8pm at Valley Hills Funeral Home. Valley Hills Funeral Home directing. Funeral will be available live via ZOOM HTTPS://zoom.us/j/94539549597?pwd=OWV3TIQvUGtwZjhpTmNIc05jTGxIUT09 Use Password/Login: Zillah

Lee V Godfrey, of Yakima, passed away peacefully on May 29, 2021 at the age of 92.  He is survived by his 3 children, David R. Godfrey of Colville, WA; Susan E. White of Yakima, WA and Mark D. Godfrey and his wife Bonita Godfrey of Zillah, WA.... View Obituary & Service Information

The family of Lee V Godfrey created this Life Tributes page to make it easy to share your memories.

Send flowers to the Godfrey family.