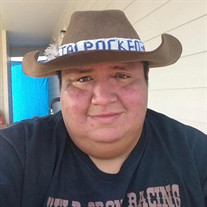 Kip S. Talpocken “St’aws” an enrolled member of the Yakama Nation, passed away August 8, 2021 in Baker City, Oregon. Kip was the eldest son born to Vergina (Talpocken) Meanus on March 27, 1985 in Yakima, WA. Kip was raised by the late Esther and Walter Speedis, Kalea Benson and Sandi Wyman. He lived in Harrah and White Swan but currently resided in Georgeville (Goldendale, WA) with his family. Kip traveled throughout WA, OR, ID, CA, AZ, NM, MT, and WY to various rodeos to compete in wild horse races. Kip was a mugger in many arenas and made many friends on those travels. He traveled many miles with close rodeo brothers – Beau Jensen, Frenchy Spino and Brent Spencer. He enjoyed watching and following the Seattle Seahawks and harassed anyone who was not a Hawks fan. Kip was a fisherman, from the river to creeks. Kip meet the love of his life, Leah, in 2009. And in 2015, they began their family by welcoming their first daughter, Kileah – “his favorite”. In 2018, Kelias – their only son – was born; followed by the baby, Adalynn in 2019. Kip was a proud dad, you could tell by the extensive photos of his children that he took. Kip and Leah enjoyed many leisure trips together, exploring new places and making memories with their children. He will be deeply missed by his children, who he spent his days caring for. Kippy is survived by his wife, Leah George; children, Kileah Marylou, Kelias Edward and Adalynn Louann; his stepdad and mom, Olsen Jr (Oly) and Gina Meanus; brothers Clarence, Lane, Grant, Shaniko, Olsen Meanus III and Kia Owlchild; sisters, Jennifer and Raymona. He is also survived by numerous family and friends. He is preceded in death by his grandmother, Mary Lou Columbus Talpocken and grandfather, Arthur “Hoss” Moore Jr of Lapwai, ID; special cousins; Emery Benson, Caroline Pacheco, and Terri Benson. Dressing services were held on Tuesday, August 10, 2021 at Valley Hills Funeral Home in Wapato, WA. Overnight services at Toppenish Creek Longhouse in White Swan, WA. Burial sunrise on August 11, 2021 at Toppenish Creek Cemetery in White Swan, WA.

The family of Kip Sol Talpocken created this Life Tributes page to make it easy to share your memories.

Send flowers to the Talpocken family.