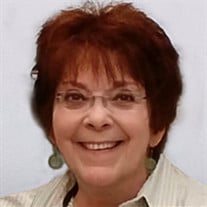 Judy Ellen Estep died peacefully at her Yakima home on Sunday, June 13, 2021, lovingly cared for by her daughters. Judy was born December 12, 1947, in Yakima to Marian Carson Estep and George Amos Estep. She joined 3 older sisters in their big Victorian house on North 16th Avenue. Later the family was completed by the arrival of a younger brother and sister. The large house and tree covered yard offered many locations for a variety of adventures. Judy had a great love for her siblings and was an eager participant in whatever mischief they might contrive. Early on she perfected a look of total innocence to avoid expected consequences. In 1958 the family of 8 moved to a farm on Galloway Drive in Lower Naches where they raised beef cattle, dairy cows, pigs, and chickens, not to mention a huge vegetable garden. Besides their own needs, they sold milk and eggs to many local families, even contributing to the health and growth of two Olympic skiing champions. Some of Judy’s favorite (and some not so favorite) farm chores included selling milk, weeding the garden, harvesting vegetables, moving sprinklers in the pasture, and watching (and chasing) the pigs before the electric fence was installed. Judy attended Roosevelt Elementary School, Lower Naches Elementary School (where she played French horn), and graduated from Naches Valley High School in 1966. She was married in 1967. Due to her husband’s military career, the couple lived in various places, including Augsburg and Bamberg, Germany, Columbia, South Carolina, Ayer, Massachusetts, and Tacoma, Washington. During their marriage they had a son and twin daughters. Judy worked as a transportation dispatcher at Fort Devens, MA, and after returning to Yakima, in the deli at Safeway. Judy had a lifelong interest in education and continued to work at Safeway while pursuing her Associate’s degree in Arts & Sciences at YVC, graduating in 1994, and her Bachelor of Arts in Education from CWU, graduating in 1996. After graduation Judy continued working at Safeway while substitute teaching until she obtained a full time position teaching second grade at Union Gap School. Judy loved teaching and her students; and was greatly respected by her fellow teachers, many of whom remained lifelong close friends. Judy was an avid fan of the Iditarod dog sled races; she loved music, art, picnics, Halloween, Christmas, and every minute she spent with her children, grandchildren, and great grandchildren. She was preceded in death by her parents, son Wayne Pettit, sister Valerie Schehl and former husband. She is survived by her twin daughters Shawn Law (Dean) of Selah and Tawnya Bothwell (Tom) of Yakima, sisters Connie Estep of Richland, Cheryl Estep and Sue Estep (Randy Fitch) of Seattle, and brother John Estep (Lee Ann) of Yakima. She is also survived by her grandchildren Stephanie, Devan (Josh), Jared (Cheyenne), Shelby, Lauren, Ethan, great grandchildren Ryder, Harlow, Eli, Blaise, nieces Carey (Angie), Deb, and nephew Tim (Stacy). The family would like to thank Judy’s friends and caregivers, Jeri and Jeanna and her hairdresser Teresa (thank you for all the love and laughter!). Memorial services to be determined.

Judy Ellen Estep died peacefully at her Yakima home on Sunday, June 13, 2021, lovingly cared for by her daughters. Judy was born December 12, 1947, in Yakima to Marian Carson Estep and George Amos Estep. She joined 3 older sisters in their... View Obituary & Service Information

The family of Judy Estep created this Life Tributes page to make it easy to share your memories.

Send flowers to the Estep family.