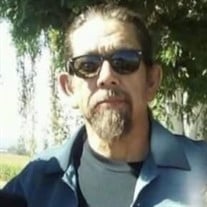 On Sunday, March 14, 2021 John Daryle De Luna passed away peacefully at home with his family by his side. John was born on Saturday, May 2,1964 to Ray and Clara De Luna in Sunnyside, Washington. His father being military moved around and at some point they settled in California for a time before moving back to the Yakima Valley. Together as a family they frequently went camping and took road trips. John had a passion for muscle cars, playing guitar, writing, & listening to music. His talent didn’t fall short for he had a love for singing, especially of his own music. During his adolescence in school he sang in choir, always making sure he was well dressed to perform, paired with a classic muscle car. His favorite of which was a 1969 yellow Chevy Nova. Later in life John had three children, Daisha, Robert John, Dalton De Luna, and Richard Lanagan. He became a grandpa to Blayne, Roxy, Ceazar, Aubrey, Riley, Christie, Victor, and Erica, whom he loved spending time with and being the best grandpa he could be. He is survived by two older brothers, Ramon De Luna, Michael De Luna, and their younger sister Diana De Luna-De’Leon.He was also a loving uncle to over 20 nieces and nephews. Never missing birthday wishes, or sending his love, or just to say hi and remind us how much he loved us. He was always there for us and even if he couldn’t be present he never hesitated to give us the strength we needed reminding us to stay “De Luna strong”. He is forever loved, by the love of his life, Roberta Asher who, though reunited later in life in 2016, gave back to his heart at a time where they both needed each other the most. John will forever be loved and remembered by his family in this life and the next. Viewing will be held on Thursday, March 18, 2021 from 4-7pm at Valley Hills Funeral Home in Zillah. A graveside service will start at 1pm on Monday, March 22, 2021 at the Zillah Cemetery.

On Sunday, March 14, 2021 John Daryle De Luna passed away peacefully at home with his family by his side. John was born on Saturday, May 2,1964 to Ray and Clara De Luna in Sunnyside, Washington. His father being military moved around and at... View Obituary & Service Information

The family of John Daryle De Luna created this Life Tributes page to make it easy to share your memories.