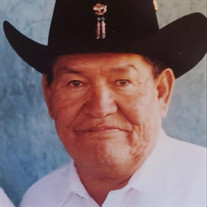 John Buffalo Jr. left this world on January 30, 2022 at the age of 80. He passed away peacefully with his son, Allen Buffalo at his side along with his niece, Ursula Jilba and granddaughters, Marilyn Smith, Gloria Dejesus, Veronica Diaz-Smith, and Matthew Smith. John was born February 16, 1941, the first of Jack Buffalo and Kathryn Buffalo- The Boy’s, 7 children. He was raised throughout Fort Belknap and Rocky Boy Montana as a ranch hand. When he came of age John moved to Seattle, Washington, getting his first job at the Pacific Science Center when it first opened. After a few years in Seattle, John met Cecilia Smartlowit, marrying her a few years later. In the early 80’s John and Cecilia moved to Fort Belknap, where he worked by helping the community as a drug and alcohol counselor. After welcoming their son Allen, John decided to pursue accounting at ITT Technical Institute in Montana. After his mother in-law fell ill John and Cecilia moved to the Yakima Reservation to help care for her and put down roots. John and his son Allen spent their time attending teepee meetings, peyote meetings, hunting and fishing and spending time on potato hill. His biggest joy was teaching Allen about his native culture and he got the same joy from teaching his grandchildren James Buffalo and LaTawnya Buffalo. John was reunited with his loving wife Cecelia and step son James Joseph Alexander. He was also preceded in death by his brothers and sisters, Deborah Smith-Buffalo, Olivia Smith-Buffalo, Matthew Smith-Buffalo, David Smith-Buffalo, Clyde Smith-Buffalo, Bernadette Smith-Buffalo. Nieces and nephews Bartholomew Smith, Martha Smith, Gloria Smith, Olivia Smith, Esther Smith, David Smith Jr, Mark Smith. Granddaughter Consuelo Martinez-Hagen. Survived by his son Allen J. Buffalo, grandson James Buffalo, granddaughter LaTawnya Buffalo of Wapato, Wa. Nieces Deborah and Dave McQueen of Renton, Wa, Dianna Smith of Seattle, Wa, Ursula and Trevor Jilba of Western Australia. Including grandchildren, grandson Richard Smith, granddaughter Gloria DeJesus, grandson Matthew Smith, great granddaughters Faith Smith and Kamiah Smith, grandson Nathan Smith all of Spokane, Wa. granddaughter Veronica Diaz-Smith, great granddaughter Tonya Diaz-Smith. granddaughter Marilyn Smith and great grandchildren Andollina Tran and William Tran Jr. granddaughter Melinda and Terrance Sabbas, great grandchildren Ayana Sabbas, Seattle Sabbas, Janessa Sabbas, Nakia Sabbas. Grandson Leonard Hansen, grandson Thomas Hanson. Grandchildren Carlota, Jessica, Bernadette, Joseph all of Spokane, Wa. John was a grandfather and uncle to many on the Yakima Reservation along with his wife’s family and grandchildren. If we forgot to name you in our time of grief please forgive us, he loved us all. We will remember John as father, grandfather, uncle, son, brother and friend who was a kind, hardworking man with a big heart who loved his family. He will be missed but not forgotten through the legacy he leaves behind within his family. Funeral services will be held at Valley Hills Funeral Home and Crematory (218 W. 3rd St. Wapato, WA 98951) Dressing is February 2 at 10:00 am followed by burial at Yesmowit Cemetery. If anyone would like to send flowers please send them to the funeral home.

John Buffalo Jr. left this world on January 30, 2022 at the age of 80. He passed away peacefully with his son, Allen Buffalo at his side along with his niece, Ursula Jilba and granddaughters, Marilyn Smith, Gloria Dejesus, Veronica Diaz-Smith,... View Obituary & Service Information

The family of John Joseph Buffalo created this Life Tributes page to make it easy to share your memories.

Send flowers to the Buffalo family.