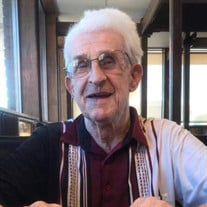 Not sure what to send?

John David Arthurs Dad was born August 30th, 1931, in Rock Springs, Wyoming and peacefully left us on June 3rd, 2022, at the age of 90. At a young age, he relocated from Wyoming to the Seattle area and graduated from Queen Anne High School. Dad became a “jack of all trades” with skills that included, but were not limited to, appliance repair, plumbing, electrical, and janitorial. He specialized in building and repairing old car radios and was known at every car show as “Radio Man John, John”. Memories of him in his blue jeans and rainbow suspenders will be cherished forever. Dad worked at McDougall’s, Wicks Appliance, and Tom Hobbs Piano to name a few. He was a little guy, but very strong, as he could throw a piano around by himself like a box of crackers. He met his lifetime love, Eugenie L. Arthurs, and they married in January 1965. Together they raised four children: Patrick, Lisa, John, and Sandra. Dad retired from all his odd jobs and relocated to Zillah in the early 2000s. Soon after, he found a job he absolutely loved as a door greeter at Walmart. There he did everything, from welcoming everyone who entered the store to dressing up in his tuxedo for Valentine’s Day at the floral department. Dad made so many friends in the valley and was well known in the classic car groups as the “Radio Man”. He would try and be at every car show and swap meet and anytime he met the owners of those beautiful cars he would ask if they needed a radio for it. He knew by the year of the car exactly what radio they would need and whether he had it in his collection. Dad worked out in his shop for hours at a time. He loved music (#loudmusic) especially Buddy Holly and Waylon Jennings. He collected hundreds of vinyl records and 8 tracks and played them repeatedly. His other pastime was WWF wrestling; he absolutely loved watching a good fight, even though it was “fake”. Family was dad’s very core. He loved, forgave, and didn’t do anything “half assed”; he expected the same out of everyone else. Dad was a strong man and taught us kids how to work hard, be honest and treat others as we ourselves wanted to be treated. Dad believed strongly in God and the power of prayer. He prayed daily and would let you know, “I said a little prayer for you”, especially if he knew that you were not feeling well or if you had a something big and exciting happening in your life. Dad is preceded in death by his parents, brother Tom, sisters Alice and Frankie, son Glenn, and daughter-in-law Barbie. Dad is survived by his wife Genie, son John (Andy), daughter Sandra (Dalia), son Patrick, and daughter Lisa (Amy), Grandchildren Janell, Kaylani, Elizabeth, Christina, Patricia, Jessica, Levi, and 7 great-grandchildren. A Celebration of Life will be held on Sunday, July 10, 2022, at the Zillah Civic Center starting at 1pm. A Classic Car Show will follow just behind the Civic Center at Stewart Park until about 4pm. For those who plan to attend, please come comfortably dressed and ready to share your favorite memories of Dad for us all to treasure!

John David Arthurs Dad was born August 30th, 1931, in Rock Springs, Wyoming and peacefully left us on June 3rd, 2022, at the age of 90. At a young age, he relocated from Wyoming to the Seattle area and graduated from Queen Anne High School.... View Obituary & Service Information

The family of John David Arthurs created this Life Tributes page to make it easy to share your memories.

Send flowers to the Arthurs family.