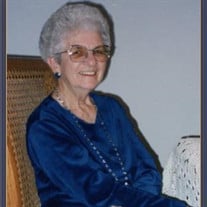 Joan W. (Duling) Mengarelli The perpetual light is shinning on our Mother, Joan Mengarelli. She passed at the home of her son, Donny, on June 2nd, 2022. Donny and Jackie were by her side as she passed; Johnnie was also close. Joan, 91 years old, was the Mother of 5, the Grandmother of 9 and Great Grandmother of 14. As a testimony to her strength and perseverance, she survived COVID-19, only to pass peacefully in due time. Joan was the daughter of Anna and Bill Duling; she was the youngest and the last surviving member of her 8 siblings. Joan was raised on her parent's farm in southeastern Kansas and graduated from Walnut High School. Joan met Johnnie when she was tending to her niece, Jolene O’Brien, who was recovering from a severe burn. They married in the fall of 1949 and according to Johnnie it was so hot his leather belt stained his white wedding shirt. They moved to Washington State in the fall of 1955. Mother will be remembered for her sense of humor, the pranks she played, her laughter and her incredible work ethic. As a young Mother, she enjoyed playing “stealing sticks” with her children. Joan and Johnnie shared 72 years of marriage together. Joan loved dancing the polka with Johnnie and being surrounded by her family. Martha wrote: Mom had the biggest personality, loved to work hard, and then it was play time! She was the best cook. Anyone who entered our home at dinner time, a plate was "set" for you. Mom was athletic, it took our whole 6.5 acres to get it done. Always baseball games, running, racing and pony rides. As kids, we loved the games she played. One of her favorite games from her childhood was the game of "stealing sticks". One Halloween she and Donny got on their ponies for a sweet ride for candy. Donny and Mom were a true match, both were always crazy as hell. Mom and Dad never missed a sporting event or activity for any of us. Above all, when she was just getting to know Johnnie Mengarelli she used her horse, a black and white paint, rightly named, "Paint" to get Johnnie’s attention. Getting in all kinds of races with her black curly long hair flying, she was after the win. Dad accepted her will to win and her fun at heart playfulness. He could see she was the only one for him. God bless her and may she now join all the family she loved. Pretty sure Nono and Nonni, Grandmother and Granddad, sister and brother Patricia and Owen will be a few of the first ones at the GATE. Love you Mom, Martha Joan is survived by her husband Johnnie and her children: Henry (Patty), Mary Jo (Tony Andrews), Julie and Donny (Jackie). The Mengarelli grandchildren are Elyse, Johnny (Brena), Riley (Jennifer), Mario (Erica). Other grandchildren are Anthony Andrews, Anastasia Olney (Logan), Italia Quigley (DeeJay), Kaylynn Wingfield (Travis) and Krystal Wiersma (Levi). The Mengarelli great-grandchildren are Kirra, Kaia, Kiley, Benelli and Mox. Other great-grandchildren include Jaxon Maras, Rigynn Walker, Raylan Olney, Ronin Olney, River Olney, Kaycin Quigley, Cora Quigley, Ray Wiersma and Caroline Wingfield. Joan is preceded in death by her parents, siblings and daughter, Martha. A funeral service was held on Monday, June 6, 2022, at Valley Hills Funeral Home. Joan was escorted to her final resting place at Zillah cemetery on a Horse Drawn Carriage led by her son Donny.

Joan W. (Duling) Mengarelli The perpetual light is shinning on our Mother, Joan Mengarelli. She passed at the home of her son, Donny, on June 2nd, 2022. Donny and Jackie were by her side as she passed; Johnnie was also close. Joan, 91 years... View Obituary & Service Information

The family of Joan Winifred Mengarelli created this Life Tributes page to make it easy to share your memories.

Joan W. (Duling) Mengarelli
The perpetual light is shinning on...

Send flowers to the Mengarelli family.