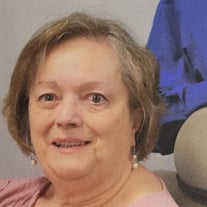 Jeanitta “Jeanie” Susan Hyatt went home to Jesus on March 13, 2022 at age 73, shortly after celebrating 57 years of marriage to Dennis Hyatt. Jeannie was born to Walter and Ruth Greene on August 21, 1948 in Pendleton, Oregon. As a child, infected with Polio, she spent time in an iron lung, after being sent home at 2 years old with no cure in sight, a neighbor lady prayed over her, she was healed. Walter and Ruth gave their hearts to the lord and never looked back. Jeannie gave her heart to the lord not long thereafter. Throughout her entire life, she held an unwavering faith in God, which she shared with those who surrounded her. Jeannie met her husband, Dennis Hyatt in 1961 while on a hay ride hosted by “H Bar Nothing Ranch” in Bothell, WA. Dennis was driving, noticed Jeannie was allergic to the straw, invited her to sit on the driver’s seat. They were married 4 years later February 26, 1965 at Christ Church of Northgate in Seattle. They went on to have five children. Dennis and Jeanie moved several times throughout the years starting with their first home in Kenmore, WA. Moving nearly 20 times before ending up in Zillah, not far from the place Dennis was born and raised, where they’ve been for the past 14 years. In addition to being a dedicated and loving Wife, Mother, and Grandmother, Jeannie also loved praying for people, attending and participating in women’s ministries, often as a leader, and just being surrounded by friends. “We will fly away” – a song Jeannie is known for singing when the brakes went out on the church van she was driving, full of women, back to Stanwood assemblies of God. Jeannie was actively involved in church wherever she went, an influencer with a magnetically positive attitude, self-sacrificing, a comforter to many. Often a safe haven for those in need of respite, she was always there to listen no matter the situation. Jeanitta Susan Hyatt joins her parents, Walter and Ruth Greene, and her son Allan, in Heaven. She is survived by her husband, Dennis, her children, Doug (Yvette), Shane (Andrea), Dorenda (Wayne), and Walter. Grandchildren (15); Zachory, Jessica (Mitch), Echo-Anne, Monique, Aaron, Makiah, Kile (Katie), Kaylin (Jacob), Kolton (Sarah), Kalvin, Kurtis, Ethan, Ivy, George and Lucas; Great Grandchildren (14); Deagan, Karina, Aubrey, Ember, Eli, Wyatt, Kiera, Katherine, Simeon, Samuel, Ezekiel, Ava, Hudson, and Asher. In her final days, the 23rd Psalm and this scripture gave her comfort: 2 Corinthians 5:8 -- “In fact, we are confident, and we would prefer to be away from the body and at home with the lord.”

The family of Jeanitta Hyatt created this Life Tributes page to make it easy to share your memories.

Send flowers to the Hyatt family.