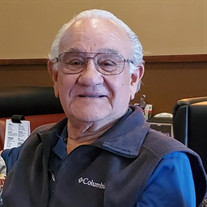 Hipolito Flores went home to be with his heavenly Father on October 6, 2021, in Yakima, WA. He was surrounded by his loved ones. Hipolito was born on August 22, 1936 to Encarnacion Juarez and Ramon Flores, in Manderson, WY. He was the eldest son of 11 siblings. The family moved to the Yakima Valley in 1942. Hipolito received his education in Wapato. He worked in the agricultural industry for many years prior to working for the city of Yakima. He retired after 30 years of service. Hipolito was fortunate to find God early in his adult life. This relationship came at a very important time in his life. To say that this encounter with God was a blessing would be an understatement. While attending church, Hipolito met Carolina Rodriguez. He had the calling from God to attend a bible College in California. The couple were married in 1960 and had four children together. They made sure to raise their children with the same love that they had for God and shared 31 years of marriage. Carolina passed away in 1992. Hipolito met and married Guadalupe Alcala in 1993, along with her three boys. Once Hipolito retired he was able to devote a lot of his time to do the work of the Lord. He had such a love for his Father God, it was his mission to spread this love and word to anyone who would listen. He was a long time member of Yakima Spanish Asamblea de Dios. Even in his final moments in the hospital he spread the words of Jesus Christ. Making sure his roommate in the hospital had the opportunity to accept Jesus into his life. A true servant to the Lord. Hipolito enjoyed spending time with his family, sitting around with the grandkids, making sure he spread that word to them as well. This is what made his heart content. Hipolito is survived by his wife Guadalupe Flores, his son Rueben Flores Sr. (Vicki), his daughters Naomi Gordon (Michael), Rebecca Nunez (Mike) and Graciela Flores. As well as stepsons Juan Alcala (Rocio), Miguel Alcala (Brenda) and Andres Alcala (Gary). Siblings Victor, Frank, Stella, Delores and Mary. He had 17 grandchildren, 4 great grandchildren and numerous nieces and nephews. He was preceded in death by his first wife Carolina Flores, parents Encarnacion & Ramon, siblings Josie, George, Rosaleah, Aurora & Raymond Jr. There will be a viewing on October 22, 2021 at Abundant life Asambleas de Dios, 1014 S. Fair Ave in Yakima WA from 4-5 pm with a service to follow. Funeral will be held October 23, 2021 at the same location at 11am with burial to follow in Wapato at Reservation Community Cemetery 5161 W. Wapato Rd.

Hipolito Flores went home to be with his heavenly Father on October 6, 2021, in Yakima, WA. He was surrounded by his loved ones. Hipolito was born on August 22, 1936 to Encarnacion Juarez and Ramon Flores, in Manderson, WY. He was the eldest... View Obituary & Service Information

The family of Hipolito Flores created this Life Tributes page to make it easy to share your memories.

Hipolito Flores went home to be with his heavenly Father on October...

Send flowers to the Flores family.