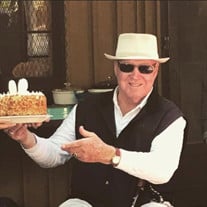 On July 5,2021 Herbert William Lundberg, 93, passed away at his home surrounded by his family. Herb was born to Lloyd and Letah Nicklin Lundberg on May 28, 1928, in Cle Elum, Washington. After the death of his young mother, he and his younger brother Don were raised by their maternal grandparents William and Jessie Nicklin. In a house full of his aunts and uncles, who became more like brothers and sisters, everyone contributed, and he learned at an early age how to work hard and the value of each penny. He graduated from Toppenish High School in 1945 where he played football, basketball, and track and field. In 1946, he married his high school sweetheart Ursula Houle, and together they raised five children. In the early years he owned and operated a laundry service with his Uncle Bill where he earned enough money to build his family a home at the age of 21. He was later hired by John I. Haas Hop Company to manage their Mabton Farm for 13 years until was transferred to the Toppenish Farm and later to also oversee farms throughout Washington, Oregon, Idaho, California and Canada. During this time, he was also tasked with making many trips to Mexico, Washington DC, Australia, Germany and Ireland where he studied and shared various hop farming practices. In this role, He and Ursula were blessed to meet and host so many special people from around the world. He was an avid rifle and bow hunter and fisherman. He was famous for his fried smelt feeds and enjoyed fishing for silvers at Rimrock Lake near the family cabin. He and mother loved the family gatherings at the cabin, and we loved his famous beer pancakes and orange blossoms. He taught all of us to water ski in the lake, snow ski on the slopes and enjoy the beauty of the outdoors. He and Ursula were members of Mt. Adams Golf Course in Toppenish where he cultivated so many special and lifelong friendships. He had a total of three hole-in-ones all at Mt. Adams, the last was on the 16th hole when he was 77 years of age. After Ursula's passing in 2005, he continued to apply his skills in his yard and flower beds, creating a very beautiful and welcoming space enjoyed by all who visited. He became acquainted with Helen Ahern some years back, and she helped him continue to enjoy life with many outdoor travels, a college course in geology at age 80, and so many other activities he would have never thought to do by himself. Herb had always looked forward to the yearly Super Bowl party with family and friends, Dick and Delores Sandberg. Placing a bet on the game would always add to the fun. This year's bet finally won him quite the jackpot, "His biggest win ever" he said with quite a smile! We will all miss his smile, his good-hearted nature, his wise advice and his unconditional love. Herb was preceded in death by Ursula, his wife of 58 years, his parents Lloyd and Letah Lundberg, his grandparents William and Jessie Nicklin, all of his many aunts and uncles, his brother Don Lundberg, and his grandson, Tyler William Lundberg. He is survived by his children Judith Lundberg, Sally (Fred) Holwegner, Leslie Simmons, Mark (Barbara) Lundberg, and Cole Lundberg, sister-in-law Barbara Ann Lundberg, his cousin Lane (Sharon) Nicklin, his grandchildren Jennifer (Scott) Ditter, Donald (Carla) Holwegner, Herbert Kelly Holwegner, Anu (Tim) Cairo, Amy (Craig) Poulin, Kristy Perrault, and Joshua (Angela) Lundberg, nephews Tom Lundberg, Matt (Dyann) Lundberg. He was especially blessed to know his many great-grandchildren and great-great-grandchildren as well. He was also loved by his very dear and special Helen, special nieces Barbara Groth, Lindsey Lauren and Letah Lundberg, and very special nephew Miles Lundberg. Services will begin 1:00pm Saturday, July 24, 2021, at Holy Family Church (5315 Tieton Dr., Yakima, WA) with a reception to follow immediately in the gathering hall. A private family burial will be held at an earlier time. Please visit www.ValleyHillsfh.com to share a memory or condolence with the family.

On July 5,2021 Herbert William Lundberg, 93, passed away at his home surrounded by his family. Herb was born to Lloyd and Letah Nicklin Lundberg on May 28, 1928, in Cle Elum, Washington. After the death of his young mother, he and his younger... View Obituary & Service Information

The family of Herbert Lundberg created this Life Tributes page to make it easy to share your memories.

Send flowers to the Lundberg family.