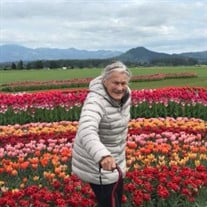 Helen Leyendekker Born April 4,1927 in Schraad a little house across from her church.She had 3 sisters, Heike(Ate) Weirsma, Tietje (Feike)Kramer and Ietje(Klaus) Wijbrandi and one younger brother Reinder ( Ruudsje)Boschma. In 1930, all 5 children and Parents Joukje and Pake Tsjeerd moved from Village Schraad to Cromwal farm in Burgwerd. At this time, WWII and mother Joukje had breast cancer and passed away after 2 years living in Burgwerd. Her sister Heike 17, was in charge of all house household plus take care of her little bother Reinder age 3 years old and little sister Ietsje 5 years old. Grandfather Tsjeerd, a very kind father had help from two daughters Tietje age 15 and Helen Hotske 12 to manage the dairy cows. During the war… many city people came to farm to receive milk, yogurt and cheese to survive Nazi takeover. People hiding in barn and lights out to hide from Nazi bombs. Many young neighbors/ friends never seen again; taken by Nazi soldiers to the concentration camps or killed. Helen never saw her neighbor boys again. In May 25, 1949, after the war, she married Ate Arthur Leyendekker from Witmarsum. They attended the CRC church in Bolsward where son Gerben 5/14/1950 was also baptized. Her sisters helped sew a wedding dress from silk parachute fabric that landed in pasture from British and American forces helping Dutch fight the Nazis war on the Witmarsum farm. Many wedding dresses and baptismal gowns were sewn since fabric could not be found during war. The WWII was terrible; so many people died which is like war in Ukraine. We pray for peace. Helen did not have an easy life but she always said have faith the size of a mustard seed in the Lord Jesus and all will be provided and well. After living through WWII, working on farm in Witmarsum she now milked cows with Art’s sister Anna Brand and became close to Leyendekker Family. Aunt Anna was kind and supported Helen since she missed family on Father’s farm.She preceded them all in death except for Jellie Joustra. Saddened but amazed by her health she lost 2 sisters, 4 brother inlaws passed; Tetje (Evert) Gilliam; Anna (Henk) Brand; Sikke(Boukje) Leyendekker; Frank(Adrianna) Leyendekker Nanning( Immie) Leyendekker plus inlaws parents Gerben & Ina. Jellie Joustra is only surviving sister and Arthur passed in 1991. During 1949 hard work on farm, Helen suffered from the contagious small pox pandemic post war and almost died. Her father was amazed she pulled through when there were no vaccine. Amazing she was strong and healthy; hardly ever saw a doctor or dentist. Shortly after WWII, Helen and Arthur and newborn Gerben immigrated to America and started dairy employment in Bellflower, CA and Lakeside CA. Every year the family grew with a newborn baby; starting 1950 Gerben, Jenny, Ina, Wilma, Charles, Arthur Jr., Sidney , Helen, Richard, Frank, and Andrew in 1965 and all was well. Mom always said cheaper by baker’s dozen. Lakeside, CA dairy was on a hill top and she tried to learn how to drive a new 1957 Chevy Car. She put 5 kids in car and around the big house she drove and did very well. Arthur did not approve her independence and talents and mother kept her faith and trust in the Lord. Life became more challenging and kept close to her family and church friends. Helen played organ and piano and sang all the church hymns. After moving to 9 different dairy farms in CA, she separated from Arthur 1976 and acquired /lived on her beautiful Sunnyside dairy on SLI Road. Soon, she received several dairy merit awards and sons and daughters helped manage. As years passed and 80 years old, the ecology regulations strained her economics and she retired. She loves her cows and calves and daily fed them. She made sure milking hours were on time, all happy cows and cows loved her. While doing dairy, house tasks,cooking and hanging laundry on clothes line she always had positive happy attitude. She made the best out of the most difficult horrific WWII times. She had many special church friends who gave her rides to CRC church and kept in touch. During her life; she had moved to 12 different dairies in 25 years and finally blessed last 46 years of her life on her dairy. On April 18, 2022, a day before her beloved father Tsjeerd Boschma birthday, she joined him and all the heavenly angels and Lord Jesus. She enjoyed all the vacations to Holland for family reunions. She was filled with jokes and surprises! She is the last of 7 Boschma family to pass and truly blessed with a long life through her trust and love for Lord Jesus. Each day, she was thankful for Lords blessings” blue skies, sunshine and leaf still… no hurricanes or Tornados”! She leaves behind 18 grandchildren and 27 great grand children and 400 relatives in Holland. She is preceded in death; her sons Arthur Jr 2018; Gerben 2021 and grand son David Honarkhah 2005. She is survived by daughters Jenny (Dave)Freeburg, Ina (Dave)Honarkhah, Wilma (Jeff) Cobb, Charles (Desirae); Sidney (Karley); Helen (Doug) Grabner;Richard, Frank, and Andrew. Mom always said… Because of the Lord’s Great Love we are not consumed, for his compassions never fail. They are new every morning; great is your faithfulness” Lamentations 3:22-23

The family of Helen Leyendekker created this Life Tributes page to make it easy to share your memories.

Send flowers to the Leyendekker family.