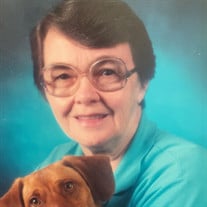 Helen May “Parks” Guerin of Yakima was 89 years young when she went to meet her heavenly father on Thursday June 17th, 2021, who she accepted as her Lord and Savior at the age of 12. Helen was born August 13, 1931, at St. Elizabeth hospital in Yakima to Walter Thomas “Tom” and Irene Desire Parks. This is the obituary of a women who was surrounded by a family that loved her and a lifetime of memories. Helen touched the lives of so many people and her presence will be missed. Her daughter Jennie will miss her numerous daily phone calls. “I love you momma.” When Helen was 6 weeks old her mother passed away. She was taken care of and loved by her father (W.T), Grandma Ollie Parks and Grandfather Philip Lewis Parks and her mother’s mother Addie B. Turner who was the one to take her to church. She married Robert Rodney Guerin the December after she had graduated from Granger in 1951. The father of her three children, Jennie Dell Brightwell, Rodney Walter Guerin and Ronald “Ron” James Guerin. In 1955 Helen and Robert operated a Texaco service station in Union Gap, WA. In 1957 they moved back to Granger to work on her father’s family farm. In 1958 they moved the family to Oldfield, Missouri. Helen decided to attend Springfield College Commerce studying accounting and business filing. She also went to Baptist Bible College and took courses from Liberty Bible College. Helen continued her faith with the lord. She loved to study the and teach others about God. She was a member of the Christian Life Center of Yakima for many years. Helen was a strong and fiercely independent woman. In 1966 she returned to Yakima to raise her children as a single mother. Over her lifetime she wore many hats. She worked at the Springfield bookstore, a salesclerk for Toppenish Friendly Bakery, Value Mart and the 5th Ave. Bi-Mart, as a night guard at Washington Beef for Eagle Security then to Allstate Security. Some of Helens proudest and most successful moments were throughout the 6 years that she belonged to the Civil Air Patrol. During this time, she was able to experience multiple search and rescue missions. In 1979 while living in Long Beach Washington the American Law Enforcement Officers Association recognized her for her special services in the advancement of criminal justice and law enforcement. In 2005 during her volunteer time with the Citizens Police Academy League of Yakima, WA. The Yakima Police Dept. awarded her limited police commission and several other awards, including the White-Knuckle Award for being shot at while on a ride-a-long. She wished she could have become a policeman. Over the years Helen had several dogs. She loved taking her dogs for walks at Gardner Park. She loved her time with her puppies and having them sit on her lap. Her dogs were one of her many prides and joys. Helen enjoyed working in her yard. She mowed her own lawn up until the age of 86. She loved taking care and planting her tomato plants, Roses, Irises and growing tall Sunflowers every year. She had a huge passion for reading books and magazines of all kinds. She had hundreds upon hundreds of books, some we found were in pristine condition, one from 1916. We are pretty sure she saved every greeting card form about 1931 and scrapped booked a lot of them. She loved reading the bible and educating herself more about God. In her bibles she had a lot of notes and highlighted scriptures throughout them. She was very knowledgeable about the Bible. Helen is survived by her daughter Jennie Brightwell of Yakima, WA., Son Rodney (Rita) Guerin of Chadwick, Mo., Daughter in-law Tammy Ranes of Oldfield, MO. She is also survived by five Grand Children. Robert (Teena) Brightwell, Lissa Munson, Stacy McAllister, Melissa (Josh) Gooler, and Robert (Autumn) Guerin. She has twelve Great grandchildren, Brent and Makayla Brightwell, Collin Brightwell-Munson, Abby Munson, Zachary and Zoe Mcallister, Tyler Shoemaker, Garren, Jayda and Walter Whitley Gooler, Jack and Lottie Guerin and one Great-Great Grandson Rocki McAllister-Muoth. She was preceded in death by her parents, grandparents and her son Ron Guerin and son-in-law Bob Brightwell and many close friends. We invite you to join us and celebrate together her next journey. Viewing is in Yakima on Wednesday June 23rd,2021 from 3:00-7:00 at Valley Hills, 2600 Business Lane. Her Celebration of life will be taking place Thursday, June 24th, 2021 at 10:00am at Valley Hills Funeral Home, 607 2nd Ave in Zillah, burial to follow at Zillah Cemetery. HOME AT LAST Proverbs 14:32 For the person who has trusted Christ as the Savior, Death is only the beginning, not the end. We will see Christ someday if we have put our faith in him.

The family of Helen May Guerin created this Life Tributes page to make it easy to share your memories.

Helen May “Parks” Guerin of Yakima was 89 years young when she...

Send flowers to the Guerin family.