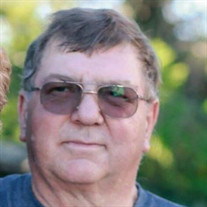 Glenn Harvey Hauver, 64 of Grandview passed away on February 11, 2022 surrounded by his loved ones. Glenn was born on March 16, 1957 to Gene and Rita Hauver in Prosser, WA. He grew up in Grandview with his younger brother, Gary. Gene and Rita had their hands full with the Hauver boys on the farm! Glenn graduated from Grandview High School in 1976. As a Greyhound, he excelled in Track and Field. He loved to run and set records at GHS. Glenn married Cheryl on November 21, 1978. Glenn and Cheryl made their home in the Valley. They were blessed with 3 amazing children. Alan his oldest son, a Marine, with the most contagious laugh. Aric, the family man and hard worker just like his Dad. Christy, his blue eyed baby girl with a take charge attitude. His love for the outdoors and classic rock were only surpassed by the love he had for his family and friends. He enjoyed the great outdoors with countless jeeping, camping, and fishing adventures. Glenn was a Welder/fabricator by trade. Glenn worked for his father in law for many years at C & C Welding in Prosser. He mastered his trade and worked hard to provide for his family. He was lovingly nicknamed "MacGyver." Glenn took pride in his work and could jimmy rig and "invent" a solution to any problem. He was blessed with five grandchildren that he loved and adored. Glenn was a natural Grandpa (papa) and he spoiled them all. Glenn was the "fun" uncle. He would help sneak cookie dough when Cheryl wasn't looking. Glenn is survived by his wife, Cheryl. His son, Aric and Brooke Hauver of Sunnyside. His daughter Christy Hauver & Fiance Scott Persinger of Grandview. His grandchildren Phenex, Cannon, Carter, Blake and Alyssa. His brother, Gary Hauver of Mabton, as well as numerous beloved cousins, nieces, nephews and friends. Glenn is proceeded in death by his parents, Gene and Rita Hauver and his son Alan Hauver. His father in law, Chris Koch. Remember that life is fragile and short. It should be lived to the fullest. He will be missed more than any words could express, but he will be forever in our hearts. Until, we meet again. A celebration of life will be planned for a later date this summer.

Glenn Harvey Hauver, 64 of Grandview passed away on February 11, 2022 surrounded by his loved ones. Glenn was born on March 16, 1957 to Gene and Rita Hauver in Prosser, WA. He grew up in Grandview with his younger brother, Gary. Gene... View Obituary & Service Information

The family of Glenn Harvey Hauver created this Life Tributes page to make it easy to share your memories.

Glenn Harvey Hauver, 64 of Grandview passed away on February...

Send flowers to the Hauver family.