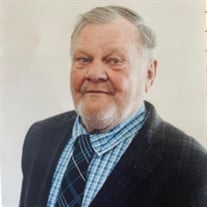 Gerben Leyendekker, 71 passed away May 28, 2021 near family Helen Leyendekker Dairy at S.L.I. Road in Sunnyside, WA. Gerben born April 25, 1950 in Sneek, (Friesland) Netherlands on April 25, 1950 to Arthur Ate Sr. and Helen Leyendekker. He was baptized May 14, 1950 in the Gereformeerde Church in Bolsward where parents and family attended. Shortly thereafter, they were on a ship to America and ended up in Bellflower, Artesia and Inglewood, CA areas. At a very young age, Gerben along with his siblings had chores by working on dairies and lived on 11 different dairies in 25 years throughout CA, Menaldum, Netherlands, Sunnyside and Grandview. He attended 9 different schools and the Mennonite community in Dinuba and Reedley, CA gave him lots of support and he excelled in academics and sports. He could throw the shot put over 50 feet; broke all school sports records. He was appreciated by teachers and classmates. At Reedley Immanuel High school he built many things in welding class, a robotic hay cart that made transporting heavy hay bales easier! He dreamed of owning a dairy but they were always sold to strangers. In 1965 Dairy on Road 64 and Ave 382, Dinuba, CA; he managed a 800 herd for 3 weeks while dad went on vacation in the Netherlands. Knudsen Creamery Health inspectors had no idea Gerben age 15 and siblings managed shipping Grade A Milk for 3 weeks! It included feeding cattle and clean up sanitizing and irrigating corn crops. Since 9th grade at Immanuel High School, Reedley CA he had to say good bye and move to a big farm in Menaldum, Netherlands where it included wheat, sugar beets and potatoes, plus 6 sheep with help of siblings.The milking cows done in an old German War Bunker in buckets and poured into 10 gallon milk cans and on a truck to creamery seemed old fashion! After a year, Dutch Immigration sent family back to USA but ended up on Vanbelle Road in Outlook, WA. There the herd grew to over 3000 cows with 4 new dairies. Dad took advantage of the “asparagus season” year round where kids could go to school 1 hour later. By now, 5 siblings dropped out of school and working 24/7 and 365 days a year was exhausting and he felt as Bible states “ honor your father and mother“ was disenchanting. In 1974, he relocated with siblings and mother Helen Leyendekker to SLI Dairy where Gerben found true peace and tranquility. His talents were greatly appreciated by mother Helen and he received his first employment check! He built beautiful fences, feed racks, stanchions, gates and arborist and landscape projects. In the early years, the dairy won Dairy Merit Awards. He had a huge truck and cattle trailer and visited friends at Sunnyside and Toppenish Livestock Auction and bought distressed cattle to nurse and recover. He loved horses snd remembers Uncle Sikke in Holland and helped getting 1967 summer hay harvest done with Friesian horses. Uncle Sikke appreciated his help and told him how quickly the hay harvest was completed.. Gerben loved BBQ’s and Jeff’s famous tacos and potlucks. He was always first to contribute to any cause if needed. He had over 400 cousins in Holland and 50 nieces snd nephews. For 46 years, Gerben found peace on SLI Dairy and is survived by mother Helen Leyendekker and brothers, Charles, Richard, Sidney, Andrew and Frank and sisters, Jenny Freeburg, Ina Honarkhah, Wilma Cobb and Helen Grabner. Preceded in death; father Arthur Sr. 1991 and brother Arthur Jr. 2018. Recently his health another setback; on May 28, 2021 he passed away and joined his heavenly angels and Lord Jesus. Special thanks to Asteria Hospital and Willow Springs Rehabilitation for their wonderful care last year. Gerben appreciated your wonderful kindness and supportive recovery.

Send flowers to the Leyendekker family.