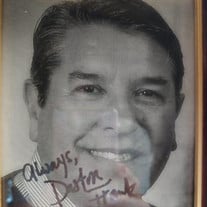 Franklin Everett East, 71, of Toppenish, WA went home to be with His Lord in heaven on Wednesday, February 24, 2021 in Yakima, WA. Frank was born in Oxnard, CA on December 9th, 1949 to David L East and Victoria (Flores) Green. He attended Ft. Wayne Bible College in Indiana. Frank married Mary, the love of his life, on July 10th, 1971 in Thousand Oaks, CA. They went on to have 3 wonderful boys, Jade, Cole and Levi. He was a car mechanic for his father at his father’s gas station and later worked as a mechanic at Sears in Medford, OR and Union Gap, WA. The Lord began a good work in him starting with 10 years of serving the youth group in Ashland, OR which was one of his most favorite ministries. He shared fond memories of that time with those kids (who are now adults) throughout his life. He was ordained as a Foursquare minister and in 1987 began what would be the greatest work of his life obeying God’s call to Toppenish, WA-the Lord’s perfect plan and place for Mary and Frank to Shephard His people. Destined to fulfill Isaiah 61:1, “The Spirit of the Sovereign Lord is upon me, for the Lord has anointed me to bring good news to the poor. He has sent me to comfort the brokenhearted and to proclaim that captives will be released, and prisoners will be freed.” He founded Shephard’s Haven Foursquare church, now known as Hope for the Nations Foursquare church where his youngest son, Levi now carries on his legacy. He retired about 5 years ago, but never stopped serving the community he dearly loved. In Toppenish, he was called on by many to pray for the city and its specific needs-always saying yes with a joyful heart. He served on the Toppenish Community Safety Network, Foursquare First Nations Counsel, and Warriors for Christ. He received many awards from the city of Toppenish. He started the graffiti paint-out ministry and organized community cleanups all with the goal of keeping his city clean. The endeavor to unite the churches in the lower Yakima Valley was dear to his heart and he prayed for unity often. He served in so many ways, it is hard for the family to remember them all. Some of Franks most memorable was Teen Challenge, Life Options, youth groups and driving the school bus for Sunnyside Christian School so his boys could attend school there. The memories and lives he touched on that bus were priceless. His prayer ministry touched and changed hundreds of lives. An opportunity to take care of his mother, Vicki, for the last years of her life were at times difficult but he considered it a love letter to her and a way to honor her. As a pastor, him and Mary were able the take many trips representing the church and Foursquare First Nations. Franks deep love and compassion for the people of the Yakima Valley was evident in how he chose to live his life and give his time, leaving a mark on the community forever. Always smiling, loving people, and giving grace were his trademarks. He had a true pastor’s heart, loving everyone he met. Frank loved laying out in the sun, taking care of his beautiful yard and all his fish in his Koi pond, playing baseball and watching his boys play sports-hardly ever missing their games. He loved going to Dodger games in LA and shared many memories with his family there. He loved playing with and hanging out with his grandchildren. Of course, teasing others and joking around were some of his most endearing qualities, knowing that is how he showed his love, everyone adored him for it. His laughter was truly contagious, especially when hitting the dashboard of the car or a table while cracking up. His enjoyment of funny movies will always make us smile. He was blessed by the many opportunities to travel to many states and countries with Mary by his side. She was always faithfully by his side. Among his favorites was visiting his kids and grandkids and the Oregon coast. He loved his God first, above all else and truly was a worshiper of His savior. His second was Mary, his wife of almost 50 years. The names Frank and Mary became synonymous. When you said Frank, you usually said Mary right after. His pride and joy were his 3 boys and 10 grandchildren. He always had a special place in his heart for them. They all loved him dearly and the Lord blessed them with so many wonderful memories together. Frank had hundreds of friends that he loved and loved him as well. His close friends in Southern California, Southern Oregon and the Yakima Valley will never forget the mark he left on their lives. Frank genuinely loved them all. Frank was proceeded in death by his father, mother, stepfather and grandparents. He is survived by his wife Mary, sons Jade (Trinda) East, Cole (Renee) East, Levi (Emily) East, Grandchildren; Jaden (Emily) Reballosa, Whitney East, Ethan East, Morgan East, Isaac East, Kyndal East, Ivy East, Micah East, Noah East and Luke East. Siblings; Gary (Patricia) East, David (Cathy) East and Cynthia (Glenn) Wennberg. Siblings-in-law; Mike (Barbara) Fraser, Steve Fraser, and John (Carrie) Fraser. Also, by numerous beloved nieces and nephews and many special aunts, uncles, and cousins. Special thanks to Virginia Mason Memorial Staff and Dr. Licht. Also, a special thank you to everyone for their prayers and generosity. https://www.gofundme.com/f/frank-east-medical-memorial-fund?utm_campaign=p_cf+share-flow-1&utm_medium=sms&utm_source=customer

Franklin Everett East, 71, of Toppenish, WA went home to be with His Lord in heaven on Wednesday, February 24, 2021 in Yakima, WA. Frank was born in Oxnard, CA on December 9th, 1949 to David L East and Victoria (Flores) Green. He attended Ft.... View Obituary & Service Information

The family of Frank E East created this Life Tributes page to make it easy to share your memories.

Franklin Everett East, 71, of Toppenish, WA went home to be with...

Send flowers to the East family.