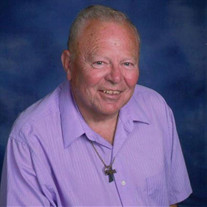 Floyd Theodore Leitch peacefully passed away Friday, June 10th, 2022 at Arcadia Medical Resort at Parkside, in Union Gap, Washington. Floyd was born in Bowman, North Dakota on October 25, 1934, to George and Cecelia Leitch. He was the 3rd child of George and Cecelia’s seven children. When he was three years old, his family moved to the Yakima Valley. He graduated from Marquette High School in 1952. Floyd’s good pal, Harvey Bryant, had twin sisters that he introduced to his two best buddies, Bill Feist and Floyd. Floyd and Bill decided on the porch that whoever opened the door first would be Floyd’s date, and history was made. Marian Bryant opened the door, and they were married a few years later on November 12, 1955. He served in the United States Coast Guard from 1952-1956. He and Marian lived in Seattle, Washington until his discharge, then returned to Yakima to start their family.  Floyd worked for Yakima Creamery, Pepsi, and Associated Grocers, retiring as a Teamster after driving a semi for 35 years. Perks of Dad’s career were ice cream and every flavor of Pepsi product. Floyd and Marian were active members of Holy Family Parish since 1962. Floyd served as usher, tabulator and Eucharistic minister. Dad faithfully went to mass daily and twice on Saturday. Floyd joined the West Valley Volunteer Fire Department in 1964. During his tenure with the department, he held the rank of Lieutenant and Captain. He retried after serving 35 years. After retiring, he rarely missed the retirees monthly coffee meet, routinely bringing donuts. Floyd and Marian raised five children in the West Valley Community. Floyd loved to boat, fish, and camp with his children and extended family. He enjoyed hunting in his early years and deer camp in later years. After retiring, he and Marian took many trips, most notable being Switzerland and Rome. Floyd is survived by his children David (Mardine) Leitch, Cecelia “Cece” (Bruce) Schlotfeldt, Andrea (Doug) Hill, of Yakima. Brian (Nancy) Leitch of Covington, WA. Lisa (Steve) Sparks of Bartlett, IL.. His grandchildren, Michael (Darcy) Schlotfeldt, Kyle (Genna) Schlotfeldt, Justin and Corey Hill, Connor and Peyton Sparks, Alex, Bailey (Sarah) and Cameron Leitch, McKenzie Frank (Dana), Cassie (Max) Kovatch and seven great-grandchildren. His brothers Dennis (Diane) and Larry (Dianna) and step-sister Carole (Tom) Taber. His brothers-in-law Buddy (Laurel) Harper, Harvey (Judy) Bryant and sisters-in-law Betty Leitch, Velma Leitch and Norma Braconnier, and many many nieces and nephews. He is preceded in death by his parents, his wife Marian of 50 years, his grandson Ryan Leitch, his brothers, Dick and Bill, sisters Pat Murphy and Yvonne Harper, sister-in-law Margaret Feist, and brothers-in-laws Ronald Bryant, Bill Feist and Jim Murphy. Visitation is Wednesday, June 15th from 3-6 with recitation of the rosary at 6 pm at Valley Hills Funeral Home in Terrace Heights. Mass of Christian Burial will be celebrated Thursday, June 16th at 10:30 a.m. at Holy Family Catholic Church. With internment at Calvary Cemetery. In lieu of flowers, memorials may be made to West Valley Fire Fighters Association for their Cadet Scholarship Fund or a charity of your choice.

The family of Floyd Theodore Leitch created this Life Tributes page to make it easy to share your memories.

Send flowers to the Leitch family.