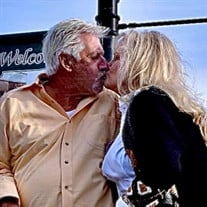 Eugene (Geno) Wayne Strocsher of Naches, Washington went to be with his Lord and Savior, January 30th 2021at The Cottage in the Meadow; after a tremendously difficult and long struggle with lung disease. His adoring wife of 46 years was at his side. Eugene was born April 28th, 1954 in Puyallup, Washington; the son of the late Walter and Mary Strocsher of Cowiche Canyon. He grew up alongside his brother and four sisters and attended Naches Valley School District. Gene had wonderful memories of his childhood in the canyon. Huge Fourth of July Celebrations with the Strocsher family, rock climbing, the crick, snow sledding down the long grade, drinking beer and whiskey as a youth with the old codger that lived in a trailer down the road, were some of his most cherished memories. Life changed the summer of 1971, when Gene, now able to drive, was hanging out at a friend’s house in Yakima; and a long-legged young woman, walking to her friend’s house caught his eye. He later told Sabrina, “…I saw you, and knew you were mine.” Sabrina’s parents fought this predestined young love, like warriors engaged on a battlefield. However, they never had a chance of stopping, what the Lord had planned for the future of these two young people. At the tender ages of 16 and 21 Gene and Sabrina were married in Coeur d’alene, Idaho with her father Lee, and her Uncle Herbie in attendance. Gene and Sabrina raised two wonderful sons Travis and Jerad, in the beautiful town of Naches. Geno loved his sons deeply! They were his last thoughts. His beautiful grand-daughters were the light in his eyes and all three had his heart. Many years of slow pitch tournaments and games with Tree Top, were enjoyed and were a huge part of the young couple’s family life. Gene’s talent (personality) won him numerous MVP Awards. They met their lifelong friends Linda and Steve, during this time. Geno loved to bowl, fish, attend Yakima Speedway Racetrack and take Goldwing trips with the Baynes. Many miles, and many states, were traveled on those bikes. These were beautiful and cherished memories. Geno worked several years in the fruit industry, driving forklift eventually moving up to truck driving. However, he found his true calling in 1994, when he began driving concrete trucks onto construction sites and roadways. He has left his mark, all across the valley, and loved sharing with everyone, where he had poured concrete. He was recognized for his ability to get a concrete truck onto any job, hill, incline and decline. He was proud to have delivered concrete to the dam and Yakima Valley Community College. It was said that, “…they couldn’t possibly put Geno on all the jobs he was requested on…”. Geno received three years in a row, an Outstanding Performance Award as Columbia Ready Mix Driver of the year, by Poppoff Inc. Something he accepted with tremendous gratitude and pride. He received Trucking and Safety Awards and Certificates of Appreciation Awards, in recognition of outstanding contribution to and for Columbia. He took tremendous pride in his work and enjoyed the construction side of his career greatly! He retired in 2013 after an on the job injury rendered him unable to work. This was not what Gene ever enjoyed or wanted. His goal was to deliver concrete, until he was 72. But God had other plans for him. Geno found Jesus the last year of his life and was baptized. He was so happy to have found God. Geno never met a stranger! Was loved by many, was a joker, a kidder and had a wonderful sense of humor. He will be greatly missed by his family and friends. There was no one like him! Geno was preceded in death by his father, Walter Strocsher and his mother Mary McKinney Strocsher and his father-in-law Raymond Lee Ekenbarger. He is survived by his loving wife Sabrina Ekenbarger Strocsher, his son and daughter-in-law Travis and Tonya Strocsher of Naches, their daughters Kierra Lee and Alexis Ann, his son and daughter-in-law Jerad and Carrie Gooler Strocsher of Naches and their daughter Kaydence Ann. His brother Richard Strocsher of Alabama, his sister Peggy Reeves of Yakima, his sister Sandy Strocsher of Yakima, his sister Cyrilla Bassford of Yakima, his sister Dawn Hammer of Yakima, his mother-in-law Tommie Sue Ekenbarger, his sister-in-law Vickie and Greg Day of Yakima and his sister-in-law Leanne Ekenbarger Perry of Union Gap and her daughter Makayla Ekenbarger, his brother Steven Bayne and his wife Linda Bayne of Selah and their daughter Nichole and Kelvin Gaut of Naches, as well as many other nieces and nephews. The family would like to express heartfelt appreciation the caring staff of the 3rd floor at Memorial Hospital for Gene’s loving care. Graveside services will be held February 11th at 10am at Terrace Heights Memorial Park. A Celebration of Life will be held at a later date, due to COVID restrictions. Arrangements provided by Valley Hills Funeral Home.

Eugene (Geno) Wayne Strocsher of Naches, Washington went to be with his Lord and Savior, January 30th 2021at The Cottage in the Meadow; after a tremendously difficult and long struggle with lung disease. His adoring wife of 46 years was at his... View Obituary & Service Information

The family of (Geno) Eugene Strocsher created this Life Tributes page to make it easy to share your memories.

Eugene (Geno) Wayne Strocsher of Naches, Washington went to be...

Send flowers to the Strocsher family.