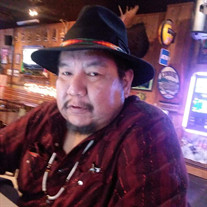 Eric Lee Umtuch Sr. “Si Um Kin” Was called to heaven on December 8, 2021. Eric was born in San Jose, California on December 29, 1969. He was residing in Toppenish, WA at the time of his passing. He is survived by his brother Eugene Umtuch Sr, and sister Lisa Umtuch. As well as his daughters Teresa Umtuch, Christina Umtuch, Josephine Umtuch, Jessica Umtuch and Felicia Tillequots Umtuch and sons Eric Umtuch Jr, Christopher Umtuch, Jedi Umtuch, and Phillip Umtuch. He is also survived by his 15 grandchildren Jackson, Abigail, Tisiphone, Marilee, Fernando Jr., Dashiell, Alex, Sophia, Jasmine, April, Everest, Gloria, and most beloved by Mickey, Millie, and his “LuLut” Melanie. Eric spent his time tinkering with cars and satisfying his sweet tooth with anything that he could find. He was a mechanic, handyman, firefighter, and a GRANDPA. He is preceded in death by his father Lee Umtuch his mother Marilyn Umtuch and children Edward Charles and Babyboy Umtuch. Viewing and dressing will be held at Satus Longhouse in Granger WA on Friday December 10 at 2pm followed by overnight services with a morning burial Saturday, December 11 at sunrise at Umtuch Logy cemetery in Toppenish WA.

The family of Eric Lee Umtuch Sr. created this Life Tributes page to make it easy to share your memories.

Send flowers to the Umtuch family.