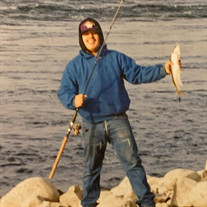 On Saturday February 12, 2022 Encarnacion G. "Jackie" Valdez, 60, of Wapato, was called home to rest. Jackie was surrounded by his wife and children, and shared his last moments in the arms of his wife. Jackie was born in Toppenish,WA on November 17, 1961 to Arnulfo Sr. and Aurora Valdez, the youngest of 13 children. He grew up in Wapato, in the area known as "Tortilla Flats." Jackie often reminisced of his childhood and the fun times he had with his neighborhood friends. He once said "those were some of the best times of my life." In High School, he was a part of the track, football, baseball and basketball teams. His true love was cross country, and he was proud to be the only freshman member to receive a varsity letter. After graduating in 1980, he went to work for Jeld Wen Lumber, in White Swan for 18 years. In 2002, Jackie began his lifelong career at Wilson's Irrigation, which later became OVS. After hard work and dedication he became the Outdoor Yard Supervisor. He would often say he had finally found the job he always wanted and the job was made for him. Everyone knew that Jackie was the go to man when you had a question or needed something. He continued to dedicate himself to his work until he chose early retirement to spend quality time with his family. Jackie's love for sports continued throughout his life. He was a dedicated softball player, bowler, golfer, and also coached minor league boys baseball. Jackie loved going out of town for sports tournaments. Some of his best memories were made traveling with his family to Long Beach, WA, and Eagles bowling tournaments. He found great joy barbecuing "burning meat" for his friends and family. Jackie played as hard as he worked. He was a very competitive man, and this showed on the golf course. Jackie would often tell his nephews, “you guys want another shot at the title?” While his dad was alive, they spent most weekends at the local fishing holes or around the kitchen table playing dominoes. Cooking breakfast and spending time with his parents was a priority on his days off. In 1989, Jackie met the love of his life Sheila and they later married September 7, 1991, and started their adventure through life together. Not only soulmates, they were also proud and loving parents to 6 children, 5 grandchildren and 1 great grandchild. Jackie is survived by his wife Sheila, daughters CristiAnna Valdez, Justine Vargas, Torre Chavez, Emily Hayden, sons J.C. Vargas and Manual Chavez, as well his niece Yasmin Valdez whom he loved as his own, all of Wapato. Grandchildren, Avianna Howard, Nathaniel Hovey, Mia Hovey, Jesus Reyes, Luis “Pal” Reyes, and great-grandson Cruz Baby Hovey all of Wapato. Godchildren, Emily Garcia, Dante McConville and Israel Martinez. Sisters Antonia Farias, Juanita Valdez (Yakima), Dolores Capetillo (Toppenish), Carmen Segrove (Mark)(Bellingham), Ofilya McConville (Wapato) and Rosemary Estrada (Seattle). Brothers, Jesse Farias (Mary), Arnulfo Valdez Jr., and Clyde Valdez all of Wapato. Preceded in death by his parents Arnulfo Valdez Sr and Aurora Valdez, brother Mario Valdez, sisters Louise Farias and Stevie Valdez, nephews Antonio “Big T” Alvarez, Arnulfo Valdez III, Julian Valdez-Reynoso, and niece Valentina Reyes. Special thanks to Nurse Shelby with Hospice. “Remember Dad, Cowboys never say goodbye, they say see you later.” -J.C Viewing and Rosary 4-7 p.m. Wednesday February 23, 2022 at Valley Hills Funeral Home in Wapato, WA. Mass 11 a.m. February 24, 2022, at St. Peter Claver Catholic Church in Wapato, with dinner to follow at The Wapato Community Center at 1 p.m.

On Saturday February 12, 2022 Encarnacion G. "Jackie" Valdez, 60, of Wapato, was called home to rest. Jackie was surrounded by his wife and children, and shared his last moments in the arms of his wife. Jackie was born in Toppenish,WA on November... View Obituary & Service Information

The family of Encarnacion G. "Jackie" Valdez created this Life Tributes page to make it easy to share your memories.

Send flowers to the Valdez family.