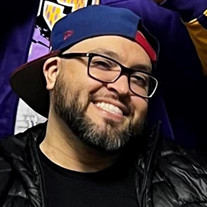 On Wednesday, June 8th, 2022, Eduardo "Eddy" Flores, loving husband and father of two beautiful children, passed away at the age of 37 in Yakima, WA. He was born in Yakima, WA on June 27th, 1984 to Maria and Roman Flores Sr. His second homes were in Texas with his cousins and the family ranch in Mexico only minutes away from each other. He attended school in Wapato, WA and grew up playing many sports. Ultimately watching his father and older brothers play baseball inspired him to master this craft and captin his own 9 for the Wapato Wolves Baseball Team. His leadership, fielding, and batting mechanics were exemplary. For almost a decade, Eddy was an instrumental figure at HAPO Community Credit Union in Terrace Heights. Through HAPO, Eddy helped customers realize their dreams, lessen their financial burdens, and created opportunities for small business owners to believe that dreams in America are possible if you have someone willing to listen and believe in you. Stronger and safer communities were built through his work here. He also helped many of you and your children purchase their first car, home, or establish some lines of credit if they weren't quite ready to get them on their way. Before moving to Washington State, his family lived in Chicago, Illinois and so it was no surprise that Eddy had such an amazing love for all things Chicago Sports but there was no replacement for the joy and heartbreak his Cubbies could bring him. He would spend hours watching the Cubs play because he believed the secret to winning in life could all be learned from watching nine innings or more. On November 2, 2016, when the Chicago Cubs won their first World Series championship since 1908 in a Game 7 scenario against the Cleveland Indians Eddy proved his point. He told anyone that would listen, "Let this be a lesson to you all, the secret to life is to always get back up no matter how late in the game it is. If YOU SHOW UP then YOU SHOW OUT BABY!" As an All-weather Chicago Sports fan, he also enjoyed watching his Bears play. Win or lose he was known for always shouting out “Daa Bears.” randomly and relished any opportunity to watch them play on the west coast. Watching them beat the Seahawks made him especially happy. His truest unbound happiness could be seen at home or in public with the love of his life, Mandy Hernandez. Through thick and thin, Mandy and Eddy spent 16 wonderful years together and created two beautiful children in Zayden and Mila. He also enjoyed the privilege of being a stepdad to a beautiful soul in Micaela. He was a devoted father and loved his children with all his heart. They were his world. Eddy truly lived life to the fullest through simple pleasures; surrounded by family and friends, full of smiles and laughter, listening to music and barbecuing. He enjoyed going on his annual camping trips and golfing with his brother and friends every weekend. Eddy will be especially remembered for his beautiful smile, laughter, and enormous heart. His presence created a nurturing culture that strengthened the confidence in everyone he met. It was no surprise he was in countless weddings and was known as the life of the party. Eddy is survived by the love of his lif, Mandy and children Zayden, Mila, and Micaela, parents Roman and Maria Flores, brothers Gerardo (Jerry), Roman (Uni), Ricardo (Ricky) (Isabel), Miguel Angel (Yocelin) Flores, loving in-laws, Tios; Tias; nieces; and numerous nephews, cousins and long time friends. Viewing will be held at Wapato Valley Hills Funeral Home on June 16, 2022 from 1:00-5:00pm followed by Rosary from 5:00-6:00pm. Service at St. Peter Claver Church on June 17, 2022 at 10:00am and laid to rest at Reservation Community Memorial Park at 11:00am. Reception will be held at Wapato Community Center from 12-4:30pm.

On Wednesday, June 8th, 2022, Eduardo "Eddy" Flores, loving husband and father of two beautiful children, passed away at the age of 37 in Yakima, WA. He was born in Yakima, WA on June 27th, 1984 to Maria and Roman Flores Sr. His second homes... View Obituary & Service Information

The family of Eddy Flores created this Life Tributes page to make it easy to share your memories.

Send flowers to the Flores family.