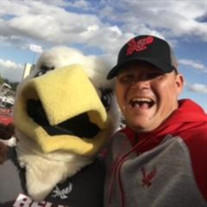 Dustin Derrick Crowe passed away at his home on Tuesday, October 19th with his wife by his side. Dustin was born on June 27, 1979 in Fargo, North Dakota, the son of Stephen Crowe and Laurie (Miller) Crowe. He spent his early childhood in Worland, Wyoming before moving to Selah, Washington. Dustin graduated from Selah High School in 1998 and received both his Bachelor’s and Master’s Degrees from Eastern Washington University. Dustin worked as a School Psychologist at several schools in the Sunnyside School District, spending the last 11 years at Sunnyside High School. He was a strong advocate for all students, but especially students with special needs. Dustin was an athlete and avid sports fan. He grew up playing football and basketball, and running track. He was a college athlete, running track at EWU for four years. Dustin coached football and was the head track coach at Sunnyside High School, coaching several athletes to successfully compete at the state and college level. Dustin also enjoyed hiking, summitting Mt. Adams several times, as well as Mt. St. Helens. He enjoyed biking and snowboarding with his friends. In the fall, Dustin spent his weekends cheering on his much-loved EWU Eagles and Seattle Seahawks and competing in multiple fantasy football leagues. Dustin and Kayla met in 2009 while working in the Sunnyside School District. Dustin proposed in 2011 and the couple married in 2012, eventually settling in Yakima, WA. They spent the last 12 years going on adventures. Together they enjoyed hiking, traveling, exploring islands in the Caribbean, wine tasting, attending concerts, and spending time with their pups. Dustin is survived by his wife and their sweet dogs, Scout and Sammy; his parents; his sister Shannon (Young) and her husband Jeremy; nephew Hunter, and nieces Harley and Hayvin; his in-laws Tom and Diann Monroe, Glenn and Kacy Braman; nephews Grady and Rhett; and several aunts, uncles, cousins, and friends. He was preceded in death by his beloved dog, Zoe. A Celebration of Life will be held on Saturday, November 6 at 3:00 p.m. at Sunnyside High School with a reception to follow at Varietal Beer Company. In lieu of flowers, please consider donating to a scholarship fund in Dustin’s honor, so the family can continue his legacy of supporting students in furthering their education. For more information on how to donate, please contact Danielle via email: [email protected]

Dustin Derrick Crowe passed away at his home on Tuesday, October 19th with his wife by his side. Dustin was born on June 27, 1979 in Fargo, North Dakota, the son of Stephen Crowe and Laurie (Miller) Crowe. He spent his early childhood in Worland,... View Obituary & Service Information

The family of Dustin Derrick Crowe created this Life Tributes page to make it easy to share your memories.

Dustin Derrick Crowe passed away at his home on Tuesday, October...

Send flowers to the Crowe family.