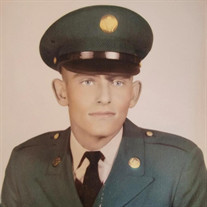 Donald “Don” Shaneman We will NEVER FORGET this Vietnam Veteran. We will NEVER FORGET this beloved husband. We will NEVER FORGET this doting grandpa and treasured uncle. We will NEVER FORGET Don Schaneman. Donald “Don” Delvin Schaneman left this world early December 16, 2021, in the enviable manner of putting head to pillow after a productive day, and just never waking. And while this brought a peaceful end to his earthly journey, his unexpected departure has left his family wishing for one more day. Don was born at home in Hardin Montana on October 28, 1946, the last of eight children for Peter and Lydia Schaneman. The family moved to Outlook WA when Don was a toddler, and he attended Outlook Elementary and Sunnyside Jr. High. Don graduated from Sunnyside High School in 1966. After graduation, Don enlisted in the Army and served two tours in Vietnam. Following his military service, Don returned to Sunnyside and worked as a box boy at Andrus and Roberts Produce Company. It was there he met Leah Waddell as he picked up her asparagus bins and took them to cold storage. Leah said the first time he smiled at her, her heart “flip-flopped” and that was it for her. Leah and Don were married in January 1970. The newlyweds moved to Montana where Don helped in the construction of Libby Dam on the Kootenai River. It was there, Leah and Don welcomed their first child Troy Allen Schaneman. The family settled back in Sunnyside in January 1971. After his work on Grand Coulee Dam, Don enrolled at Yakima Valley College and obtained his professional certification in welding. He continued his education at Columbia Basin Community College where he obtained advanced welding certifications. Utilizing these certifications, Don worked for Flodine’s Manufacturing and later for Wild Rivers as a maintenance mechanic/welder. In July 1979, Leah and Don were blessed by the birth of their daughter April Lynn Schaneman. After retirement, Don and Leah supported and raised several of their grandchildren. This was a gift of time and resources, but most of all love. Don was endlessly proud of all his grandkids and delighted in being around them. Don posed a gruff or grumpy exterior, but he used it to fuel a quick, and witty sense of humor. He was a hard worker who relished time at the VFW, the casino, searching the internet for exotic birds or emojis, and taking scenic Sunday drives. Don liked the outdoors, especially fishing and gardening, but all these activities paled to just spending time with his wife and family. Don is survived by his wife of 52 years, Leah Schaneman, son Troy Schaneman, daughter April (Dylan) Haak; 10 grandchildren Allison Miller, Kelsee Schaneman (Orlando Alcala), Matthew Schaneman, Rebecca Schaneman, Sarah Schaneman, Lana Rich-Schaneman, and Trevor, Blake and Taylor Haak; 3 great grandchildren Juan, Jayden and Hennessy Morales; and many nieces and nephews. He is preceded in death by his parents Peter and Lydia Schaneman, and seven siblings. A service will be held at the Valley Hills Funeral Home in Sunnyside on January 3, 2022 at 2:00pm. A celebration of life reception will follow. Those wishing to honor Don may donate to Covenant House, a charity that provides support for children struggling with homelessness.

The family of Donald Delvin Schaneman created this Life Tributes page to make it easy to share your memories.

Donald “Don” Shaneman We will NEVER FORGET this Vietnam Veteran....

Send flowers to the Schaneman family.