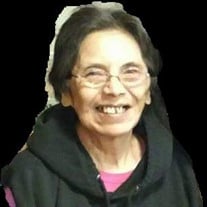 Patinway – Delilah J. Martinez (Sockzehigh) July 18, 1948 – February 16, 2021 A wonderful sister, wife, mother, grandmother and friend. The little big sister of David Northover, Loretta Smiscon, Syldia Smiscon, Chester Rodriquez, Felicia Smiscon, Philip Rodriquez and the late Ross Sockzehigh, Sally Ann Rodriquez and Nina Thompson. The loving wife of Marvin Martinez Sr. The proud mother of Jeanna Hernandez, Tina Sockzehigh (Douglas Marconi Sr.), Leo Martinez, Camille Martinez (Michael Tinoco), Marvin Martinez II and Angela Martinez. Also cared for as her own, Roxanne Sockzehigh, Darwin Sockzehigh, Marvin “Mikey” Martinez III, Wapatasyi Martinez (Kenneth Thomas), Tqua Nish Sha Martinez and the late Nicholas Martinez. The caring grandmother of Mark and Matthew Sanchez, Dirk Spencer (Alta Hunt), Andraya Trujillo (Reginald Sargeant), NaTiSha Desirae Alvarado, Vernon Martinez, Xalish Martinez, Ilakayxi Martinez, Yaslam Martinez, Mikah Vigil, Landin Vigil, Lynma Tinoco, Gabrielle Tinoco, Michael Tinoco and the late Wilma Martinez. She was born to the late Oscar Sockzehigh and Delores Smiscon and raised by her grandparents the late Johnny Sockzehigh and Agnes Homer in Wiley City. As a young lady she would work as a farm laborer driving trucks for the hops and potatoes. She enjoyed softball and bowling. Surprisingly daring and adventurous, she had also participated in the local drag races at the Renegade Raceway. She dedicated most of her life to raising her beautiful children and embracing her culture. She made baby boards, wing dresses, ribbon shirts and powwow regalia for her children and grandchildren and was always excited to spectate at rodeos. She was also known to spread her love through cooking, always making more than enough just in case. Her frybread and biscuits especially were a family favorite she taught to a few since it was requested by many. Throughout her years she had also worked for the Yakama Nation and gained longtime friends and family working with various programs. Education - Violet Rau, Martha Yallup, Rose Barnick. Tribal Maintenance - Beatrice Sockzehigh and Marlene White. YN Alcoholism Program - Patricia Ike, Stella Washines, Carrie Jo Jones and Judy Shirley. Time was also spent caring for her late father in law Bennie Martinez Sr. Delilah lived a life full of love and light granted by family and friends both near and far. She was a strong and independent woman that humbly gave her all. Though it got tough she was surrounded by the support of her family when called home by the creator. The family would like to thank JoDe Goudy, Yakima Home Health nurse Ashley and the physical therapist Sir Lance for their time and attention through the hard end. A gentle reminder is also extended to all that before her passing she made it clear, she loves all her people. Dressing will take place at Valley Hills Funeral Home in Zillah on Thursday, February 18, 2021 at 10am, Funeral service will begin at 9:30am on Friday February 19, 2021 at Toppenish Creek Longhouse, burial to follow at Toppenish Creek Cemetery in White Swan.

The family of Delilah J Martinez created this Life Tributes page to make it easy to share your memories.

Send flowers to the Martinez family.