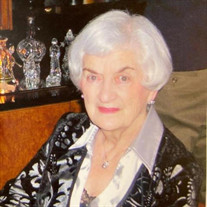 Constance “Connie” Querin died peacefully in her home on Sunday, August 15, 2021, on the feast of Our Lady’s Assumption. She was 101. Constance was born in Vancouver, British Columbia on November 2, 1919, to Reginald and Margaret (Reichweine) Fairleigh. She graduated with honors from the University of British Columbia with a B.A. in both Philosophy and Psychology. There she was also a member of Alpha Phi and Vice President of the Psychology Club. She later went on to Seattle University where she graduated from the School of Nursing in 1953 and was awarded the “President’s Cup” for having the highest marks over her four years of college work. She became the supervisor of the pediatric ward at St. Elizabeth Hospital in Seattle, Washington. In 1961, she moved to Sunnyside, Washington where she married veterinarian Dr. Oliver Scott Querin. She worked alongside her husband in their vet clinic for 30 years. Constance was a longtime member of St. Joseph’s Catholic Church in Sunnyside. She attended daily mass until she was physically unable to do so and devoted her time to praying the Rosary daily. She loved to travel the world and made many pilgrimages to places such as; Lourdes, Fatima, Assisi, Medjugorje, the holy lands. Connie enjoyed planting flowers around her home.  She had an elegant style and was passionate about fashion and design. She loved learning about antique furniture and art glass. As a member of the Pearl Hughes Guild, she helped plan several antique shows to benefit the Children’s Orthopedic Hospital. Connie was an avid bridge player and loved spending time with her bridge club members. In 1998, she earned the title of “Life Master.” Constance led a full and exciting life and will be greatly missed by many. She is preceded in death by her loving husband Dr. O.S. Querin, two brothers David and Richard Fairleigh, and sister Mrs. Robert (Dorothea) Armstrong. Survivors include brother Joseph Fairleigh, and four sons Joseph, John Anthony, Oliver S. Jr., and Charles. She also leaves behind five loving grandchildren, nine great-grandchildren, and many nieces and nephews.  The Rosary will be said inside St. Joseph’s Church in Sunnyside On Wednesday, August 18th at 7:30 p.m. Public viewing at Valley Hills Funeral Home in Sunnyside will be held on Thursday, August 19, 2021, from 4 p.m. to 7 p.m. Mass of Christian burial will be celebrated on Friday, August 20, 2021, at 1 p.m. at St. Joseph’s Catholic Church in Sunnyside. Reception will follow in the gym.

Constance “Connie” Querin died peacefully in her home on Sunday,...

Send flowers to the Querin family.