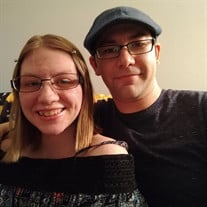 Carollee Monteaka Kay Fisher born on September 8, 1994 died on May 26th, 2021 at far too young age of 26 years old. She was born and raised in Yakima, WA by her parents, DeAnna and Delbert Boss. She was the fifth of six sisters, Sarah, Trisha, Monica, Tina, and Desirae. Sometimes they would bicker and squabble but were always there for each other when times were tough. On June 21, 2018 she got married to John Fisher which she described as the happiest day of her life. She always called him her hoosband, her Johnny and they loved each other more than words could ever describe. On May 24th, 2021 she was struck by a careless driver while trying to cross the street just one block from her home. She fought as hard as she could but in the end lost the fight, taking her dying breaths in the arms of her beloved husband. Carollee dreamed of being a mother and raising a family with her husband, John. She had a faith in God which was an inspiration to others and a driving factor in her life. At age 7 she was diagnosed a Type 1 Diabetic which would put many challenges in her life. Just days before the tragic event which would end up taking her life she had found out that her blood sugar had entered the normal range. This was a huge personal goal and a big step toward starting a family. Carollee touched the lives of everyone around her. She fought for her friends. One of her close friends came out as Trans and she became their staunchest ally. Jumping to her defense whether she was there or not. She protected the new cashiers and workers from customers which would mistreat them or abuse them. She may have been a small thing, but if you attacked someone who was one of her people then God help you. The best story to show the heart, soul and boundless love of Carollee is in her work as a cashier. Her generosity toward a person down on their luck known only to her as her sandwich man. She would see thousands of customers each week and many were rude and abusive. No one would blame her if she had become callous to the strife of others and turn a blind eye but that wasn’t Carollee. She would never let that happen. Her sandwich man came into the store just to buy the makings of a simple sandwich, clearance bread and meat. She would see him counting his change to see if he could afford to eat that day. Carollee never hesitated to pay the difference from her own pocket when he got to the register. When the pandemic hit he was denied entry to the store because he often didn’t have a mask to wear. Yet Carollee wouldn’t let that stand. She bought him not one but several masks so he could keep coming into the store to get what he needed to make his sandwiches. Another example of the heart of Carollee is that many times at work she would encounter a co-worker who was struggling with their diabetes and she was always there to help and teach. There was this one co-worker who had the misfortune of making Carollee very mad at her. However, when she had found out she was diabetic and that she didn’t know exactly what to do there was Carollee. Anger gone, Carollee jump to take care of her. Got her a good blood glucose meter, told her little tricks to manage her blood sugar, even helped her work on a map for carb rules to get her back on the right road. Friend or foe, she always stood for what was the good and Christian thing to do. She always believed in fighting the good fight. She said she could accept losing the good fight but she couldn’t accept not fighting it. She cared about every person regardless of what others may have thought, regardless of what the circumstances of their life may be, regardless of the cost that care may have to her. She was the most loving and supportive wife. She was a caring and compassionate daughter. She was kind and fun. She lit up any room she was in, she was dangerous with spoons, she always had your back, she always made others feel good after a conversation with her, and she always made certain that anywhere she happened to be was a safe place for anyone and everyone. The world has lost one of its best souls.

Carollee Monteaka Kay Fisher born on September 8, 1994 died on May 26th, 2021 at far too young age of 26 years old. She was born and raised in Yakima, WA by her parents, DeAnna and Delbert Boss. She was the fifth of six sisters, Sarah, Trisha,... View Obituary & Service Information

The family of Carollee Fisher created this Life Tributes page to make it easy to share your memories.

Send flowers to the Fisher family.