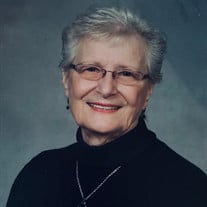 Carol was born on September 10, 1938 in Yakima, Washington. She was the daughter of Arthur and Ruby (Hinkley) Perkins. Carol grew up in the Wapato area, and was educated in Wapato, graduating with the class of 1956. After graduation, she attended Sacred Heart School of Nursing in Spokane, and St. Elizabeth School of Nursing in Yakima. She married Dee Adams on Dec 21, 1958 and moved to East Wenatchee. She worked as an operating room technician at St. Anthony’s and Deaconess Hospitals in Wenatchee. In 1973, they returned to the Wapato area where She was employed by the Indian Education Program at the Wapato Middle School from 1978 to 1991, along with running Renegade Raceway and the concession stand from 1971-1991. Carol enjoyed camping, going to car and tractor shows and traveling to watch Cheyennes horse show competions across the country. Halloween and Christmas were her favorite holidays. Most of all, she enjoyed her family and friends, reading books, playing games and doing puzzles. Carol was preceded in death by her husband Dee, sister Yvonne, and father Arthur & mother Ruby Perkins and recently her sister-in-law Marilyn Adams. She is survived by one daughter Tennia Adams, two sons, Tony Adams, Troy (Kelly) Adams, and two grandchildren, Tim (Shanna) Thompson, and Cheyenne Adams, her sister Gwen Radke. She is also survived by two brothers-in-law, Leroy and Leo Adams. Four nieces, one nephew and multiple grand and great grand nieces and nephews. The family would like to thank Jan Peterson and Deanna Morehouse for their friendship and help in allowing Carol to remain in her home until the end. If you wish, donations can be made to St. Jude Children’s Research Hospital or Charity of your choice.

Carol was born on September 10, 1938 in Yakima, Washington. She was the daughter of Arthur and Ruby (Hinkley) Perkins. Carol grew up in the Wapato area, and was educated in Wapato, graduating with the class of 1956. After graduation, she attended... View Obituary & Service Information

The family of Carol L Adams created this Life Tributes page to make it easy to share your memories.

Send flowers to the Adams family.