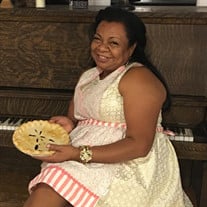 In loving memory of Carmanita Atwi Ila Anahoy Pimms Carman was born to Reta Ann(Pimms) Stevens and Frankie Stevens (Llyod Berry) on June 16th , 1963. Carman was raised in White Swan, Washington. As a child, Carman was known as Sweet P because she such a sweet girl. Ever since she was young, she was everyone’s caretaker. Carman attended both Mount Adams and Wapato School Districts. As a young lady, Carman was the first Miss Wapato Longhouse. This is where she showcased her talent for cooking. Carman participated in many community events. Carman worked for several years at the Yakama Nation Tribal School. Although she worked in the kitchen, as the Food Service Manager, many students would come in daily to chat with her and share their stories. From here she moved into the home liaison potion. Carman gained the love and admiration from all the students she worked with. She was given the label “Mom” by many of them. Carman took a summer job working at a non-profit organization, The Campbell Farm. After a couple of summers working as the cook, she became the executive director. The Campbell Farm became her home, where she built a strong community outreach program. Through Carman’s vision, she created a feeding program to help feed youth, homeless and elders. She also made the Campbell Farm a summer home for many youth. It was Carman’s passion to create a place where everyone felt welcome and safe regardless of where they came from. She never turned anyone away. Carman was just finishing her Call process to become a Pastor. Carman will forever be known for her infectious laugh, her passion for cooking, shoes and lipstick. She is survived by her companion, Julius Sims, son Jamaal Pimms, daughter Dionna Bennett (Peter), son Julius Kurt Hill (BJ), daughter Charity Sims, daughter Jamisha Sims (Robert), daughter Janel Pimms, Bonus daughter Tamiko Berry, grandkids Rocky, Kenny, Nas, Onna, Zariel, Lo, Lee, Mya, Yanni, Zuli, Cass, Maarqqus, CJ, Zya, Maree, Jaydee, NeiNei. Her sisters Dorothy Winnier, Antonia Stevens, Gina Stevens, Trina Stevens, Tamera Stevens, Larena Van Pelt (Shawn), brother Llyod Berry Jr. Her mother-in-law Mary Ann Sims, aunts Anita Swan (Tom), Suplikawai, Percy Blackwolf and uncle George (Esther), uncle Leroy Berry, and numerous cousins, nieces, nephews, and friends. She preceded in death by her parents Reta and Frankie Stevens, and her father Llyod Berry. Her maternal grandparents Meda and Raymond Pimms Sr. paternal grandparents Watson and Tilda Totus.

The family of Carmanita "Awti Ithla Anahoi" Pimms created this Life Tributes page to make it easy to share your memories.

Send flowers to the Pimms family.