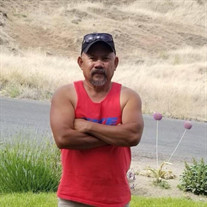 On September 15, 1957, Carlos Soliman Jr. was born to Carlos & Erlinda Soliman in Manila, Philippines. He was the second born out of seven children. His siblings called him Lito and so did almost everyone else throughout his life. He spent his early years and attended Elementary School in Manila. In 1969 he, along with his family migrated to Outlook, WA where he continued his education there until they moved to Sunnyside, WA in 1971. He attended Sunnyside Schools and was active in track and baseball and graduated with the Class of 1976. Right after High School Carlos got a job at Hanford as a Custodian and worked his way up to a Nuclear Operator until his retirement. Carlos was a great father to his children Michelle, Christopher, Vanessa & Adrian. He was a jack of all trades and he enjoyed fishing, racehorses, playing poker, BBQing, gardening, bike riding, and exercising. He continued to live out his retirement years in Sunnyside, WA. On January 14, 2022, Carlos was tragically taken from his family. Carlos is survived by his children Michelle, Vanessa and Adrian, grandchildren: Josue’ “PJ”, Ashly, Kalani, Erlinda, Aracelle, Damian, Tanner, Haylie & Avalon, his siblings: Cesar, Jolina, Elsa, Cecilia and Cristina, several nieces, nephews, relatives and his special friends who he considered family: Nick & Katrina Haggert, The Luther Family & his neighbors The Ramos Family. Carlos is preceded in death by his brother Robert, his parents Carlos & Erlinda, his son Christopher, his niece Bon and his special friend/brother Kevin Luther. Carlos will be remembered as a kind and loving man who loved to help people until his dying day. Funeral Services will be on Friday January 28, 2022 at Valley Hills Funeral Home in Sunnyside at 11a.m Graveside service will be held at the Lower Valley Memorial Gardens Cemetery to follow. After the graveside service, all are welcomed back to the Valley Hills Funeral Home for a Luncheon.

On September 15, 1957, Carlos Soliman Jr. was born to Carlos & Erlinda Soliman in Manila, Philippines. He was the second born out of seven children. His siblings called him Lito and so did almost everyone else throughout his life. He spent his... View Obituary & Service Information

The family of Carlos Soliman Jr. created this Life Tributes page to make it easy to share your memories.

Send flowers to the Soliman family.