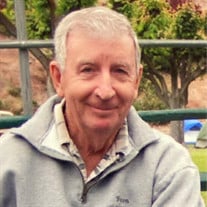 Byron Stillwaugh, 86, of Selah, WA passed away on February 5, 2022. He was born on July 3, 1935 in Tieton, WA to Russell A. Stillwaugh and Katherine (Frederick) Stillwaugh. In 1954, Byron enlisted in the US Navy up until 1958 and then re-enlisted in 1959 retiring in 1975. Throughout his tenure in the Navy, Byron was able to travel much of the Pacific, and Asia. His highest rank achieved was Senior Chief Radio Man. In 1959, Byron married Linda Voorhies in Datto, AR and together they had two children, Brett and Kimberli. After retiring in 1975, Byron and his family moved to Selah. He worked for Frito-Lay and in the orchard industry, which he really enjoyed. In 1986, Byron married Margaret Dimick-Stillwaugh. Together they lived in Selah until they moved to Pensacola, FL where they enjoyed each other’s company and having fun on the beach. After their stay in Florida, the two moved to Argyle, TX. This is where Byron and Margaret began their involvement in community service through their Methodist church. In 2016 Byron and Margaret moved back to Selah to be closer to family and friends. He will be remembered for his smile, contagious laugh, mischievous behavior and his love for his family. He enjoyed playing and watching baseball, bull riding, fishing and good ole country music. Byron is lovingly survived by his wife, Margaret Stillwaugh, his son Brett Stillwaugh, his daughter, Kimberli (Roger) Coburn, son, James (Karrie) Dimick and son, Dan (Valerie) Dimick, his sister, Charlotte Rishor, 10 grandchildren, 5 great-grandchildren, and Linda (Stillwaugh) Johnson. He is preceded in death by his parents, his brothers, Brian and Warren and his sister Elaine. A Celebration of Life with Military Honors will be held on February 12, 2022 at 2:00pm at Valley Hills Funeral Home Yakima Chapel. Please visit www.ValleyHillsfh.com to share a memory or condolence with the family.

The family of Byron Stillwaugh created this Life Tributes page to make it easy to share your memories.

Send flowers to the Stillwaugh family.