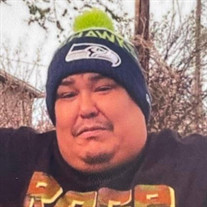 Brandon Daniel Smartlowit Tii’ás Brandon Daniel Smartlowit unexpectedly passed away on April 9th, 2022 at the age of 37 at his family home in Wapato, WA. Brandon was born July 15th, 1984 in Toppenish, WA to Dale and Sandra (Lamebull) Smartlowit. Brandon was raised in Wapato all his life, he graduated from YNTS in 2005. He then went to work at YFP for many years, eventually moving to his most recent job at Yakima Fruit in Wapato where he made many friends throughout the years, he will be greatly missed by many. Brandon was a very loving and kind hearted person to everyone he met. During his younger years he would always be ball’n it up at the basketball courts in apas goudy. He enjoyed cooking, having barbecues, and being around his family and friends where he would always be joking around. Brandon survived by his Mother; Sandra, Grandma; Levina Wilkins, Sister; Darcell (Leo), Brothers; Christopher and Dale, children; Adam Daniel, Aysia Aylene, Kamala Kayley, Nephews; Tyrese and Sebastian, Niece; Shanya “Pants on Fire”. Aunties; Ki and Sharon, and Uncle Scott & Auntie Jackie along with numerous Aunts, Uncles, and Cousins. Two long time friends Dunbar (Lois) John, and Thomas Andy. Companion; Jaime John. He is preceded in Death by his Dad; Dale “Wiawíkt” Smartlowit and Uncle; Alan Arrangements as follow; Overnight Services begin April 14th, 2022 at 1pm at the Toppenish Creek Longhouse in Whiteswan, WA. Burial will conclude at sunrise where the final resting place will be at the Saluskin Cemetery in Wiley City

The family of Brandon Daniel Smartlowit created this Life Tributes page to make it easy to share your memories.

Send flowers to the Smartlowit family.