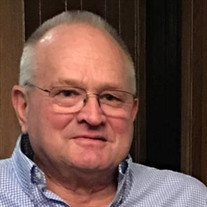 BILLY DEAN “BILL” TRUE For all of us who knew Bill True, we lost a special Husband, Father, Grandfather, Great-Grandfather, Brother, Brother-In-Law, and Friend on March 21, 2022, when he passed into God’s loving arms, surrounded by his family. Dad fought as hard a fight as you can fight against cancer, winning most of the battles, but not quite the war. Billy Dean True was born in Steele City, Nebraska, December 16, 1946, to Ernest Christopher and Hilda Matilda True. He had 6 older siblings, 4 sisters, Donette, Ladean, Jeralee, and Patty; and twin brothers, Noel and Neal. Dad was raised on the family farm in the small community of Linn, Kansas, where he attended Zion Lutheran schools at a young age, and graduated from Linn High School in 1964. Perhaps more important than his high school diploma was his degree of hard knocks from his dad, Grandpa True, earned alongside his brothers and sisters hand-milking cows at 4:30 a.m. every morning before going to school. Dad’s lifetime achievement was attracting the special attention of Connie Lynn Helms. His high school sweetheart graduated a year behind him in 1965, and they married December 18, 1965. Dad was already working for the Atchison Topeka Santa Fe Railroad in Topeka, Kansas at that time, and Topeka is where they made their first home. Dad worked his way up in the railroad business, but also began developing his early interest in car trading. Meanwhile, Jeffrey Allan True, their first son, was born July 2, 1968, Mom’s 21st birthday; and Patrick Alan True was born November 17, 1970. Dad continued with the railroad until 1977. He also sharpened his skills at buying and selling used cars. During this time, Dad was proud of acquiring some of the most beautiful Mustangs and Camaros Topeka had to offer. Dad moved the family in 1977, for the opportunities in the great Yakima Valley. Zillah became our home, and we remained in Zillah through Jeff’s graduation from Zillah High School in 1986, and Pat’s in 1989, after which Dad and Mom relocated to Yakima. Following relocation to the Yakima Valley, Dad’s became part owner in the Toppenish A & W restaurant with Mom’s family, and Dad started his first used car dealership in Toppenish, known as True’s Auto Sales. Aside from a stint with Valley Ford where Dad was perennial Salesman of the Month at “Bargainville” from 1984 to 1987, True’s Auto Sales grew from a tiny “pot lot” on the Eastside of Toppenish, to a large location on First Avenue in Toppenish. In 1987, Dad opened True’s Auto Plaza, Zillah’s first ever used car dealership. Dad taught Pat more working alongside him in the car business, than he could ever learn in high school, college, and law school combined! Jeff joined Dad in 1990 as a partner in True’s Auto Plaza through its move to freeway frontage in Zillah, and later to Union Gap, Washington, where they ran both True’s Auto Plaza and Autos To Go. Although Dad retired from the business, and Jeff and his daughter, Megan, continue on with True’s Auto Plaza, Dad continued to maintain a daily interest right up until the end. Dad was truly a pioneer in the used car business, and the “Buy Here Pay Here” market. He was meticulous with the bookkeeping, and he was on the cutting edge of how to make it work for anyone who wanted to purchase a car from him. Dad never met a customer he would not serve, and to this day, he has maintained customers from many years ago who continue to come and request him personally. Besides being a place of business, True’s Auto Plaza was a place for many, many people to hang out who Dad considered as good friends, and both his children and grandchildren can tell stories for countless hours about the fun they had with Grandpa at the “car lot.” When Dad was not at the car lot, he was normally found driving up and down First Street in Yakima, visiting friends in every other car dealership along the way. Besides the car business, Dad had many other ventures over the years, he was quite the entrepreneur. He invested in residential and commercial real estate, he made a woeful attempt at investing in commercial fishing on the Columbia River way back in the day, and he was part of a gold mining venture on Blewett Pass for a short period. He did these things more for the time spent interacting with other people, than for the likelihood of hitting it big. Dad and Mom have been members of Mount Olive Lutheran Church since locating to Yakima in 1989. Dad’s faith in Jesus Christ has been extraordinary to witness during his courageous fight with cancer over the last 7 years. Dad was fortunate to be able to spend a great deal of his “work” time also with family, but spending time with family was also what he did outside of work. Dad and Mom also liked to travel regularly, most often to Mexico. Dad is survived by his wife of 56 years, Connie, his son, Jeff and wife, Gina, their daughters, Amber (David) DiMaggio, great-grandaughters, Emma and Presley, and Megan True (Kayla); and son, Patrick and wife, Sonia, their children, Sarah True, Patrick True (Alexis), and Reina Rodriguez. Dad is also survived by his sister, Donnette Oehmke, and by his brothers, Noel and Neal True. Visitation will be at Valley Hills Funeral Home, 2600 Business Lane, Yakima, Washington, 98901, on Wednesday, March 30, 2022, from 3:00 to 7:00 p.m. A Memorial Service will be held at Mount Olive Lutheran Church, 7809 Tieton Drive, Yakima, Washington, 98908, on Thursday, March 31, 2022, at 10:00 a.m., with graveside at Terrace Heights Cemetery, and final Reception thereafter at Mount Olive Lutheran Church. The family extends a personal invitation to all of Bill’s friends that he leaves behind.

BILLY DEAN &#8220;BILL&#8221; TRUE For all of us who knew Bill True, we lost a special Husband, Father, Grandfather, Great-Grandfather, Brother, Brother-In-Law, and Friend on March 21, 2022, when he passed into God&#8217;s loving arms, surrounded... View Obituary & Service Information

The family of Billy True created this Life Tributes page to make it easy to share your memories.

Send flowers to the True family.