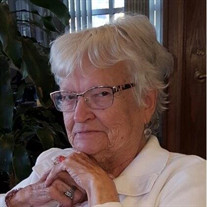 Billie Jean Evers, 91, of Moxee, WA passed away on Feb. 18th, 2021 in Sunnyside, WA. Billie Jean was born in Red Star, Arkansas on Oct. 30th, 1929, the beautiful daughter of Bill & Della Eversole. Being one of the eldest siblings in a family of 12 kids, she only attended school until the 8th grade so that she could care for her younger brothers and sisters. Her family lived in Arkansas, Kansas and Missouri, often moving for work. Billie Jean was married to Harold Jackson in 1946 and moved to Washington in 1947. They had 4 children, Dennis (Alice) Jackson, Brenda (Wallace) Anderson, Sandra (Tony) Perez, and Wendy (Mark) Davis. They were married 25 years and lived in the Wapato/Parker Heights area. Billie worked at Sawyer Tavern & Restaurant for many years and became lifelong friends with many people in the area. She also worked in various apple warehouses and earned the title of one of the fastest packers around the valley. Mom was Madam President of the Fraternal Order of the Eagles at one point. She was an avid bowler for a large part of her life and attended many tournaments. In 1982 she married John Evers and settled in Moxee, WA. They had a very happy marriage, always busy with work and an active social life. She worked until the age of 75 years and retired from Price Warehouse in Naches, WA. She continued working as a sampler at several grocery stores for a time. She and John became snowbirds and traveled to Arizona every winter. Mom absolutely loved the adventure and meeting so many new people. She loved her 12 grandchildren, sometimes talking for hours on the phone to them, taking them to guitar lessons, skate parks, rides to school, and sending them packages through the mail as often as possible. She became tickled pink when she saw her great-grandchildren arrive. Mom loved camping, Bumping Lake, sagebrush, family and friends, gatherings, playing Skipbo, going to bingo and casinos, and knitting tons of stuff for those she loved. If you went to her home she offered you a beer and a chair and you would have to stay and visit for a while. After the passing of John, Billie lived at Ponderosa Assisted Living. She made more friends and loved all the activities they offered. She was very socially active there. Mom was a very happy, fun person and loved people and they in turn loved her. She touched many peoples’ lives and will be greatly missed. Billie Jean is preceded in death by her husband John Evers, father and mother Bill & Della Eversole, siblings Cecil Eversole & Ruth Nellsch, grandson Ross Tobia, and son-in-law Mark Davis. Services are to be determined at a later date. In lieu of flowers make donations in memory of Billie Jean to the American Diabetes Association.

Billie Jean Evers, 91, of Moxee, WA passed away on Feb. 18th, 2021 in Sunnyside, WA. Billie Jean was born in Red Star, Arkansas on Oct. 30th, 1929, the beautiful daughter of Bill & Della Eversole. Being one of the eldest siblings in a family... View Obituary & Service Information

The family of Billie Jean Evers created this Life Tributes page to make it easy to share your memories.

Send flowers to the Evers family.