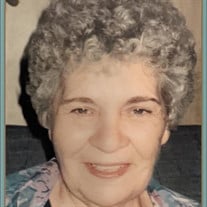 Beth Ann Withrow, 86, of Gleed, Wa. passed away peacefully on June 2, 2022 following a long struggle with cancer. Beth was a beloved mother, grandmother, great-grandmother and friend. She always had a kind word and positive, joking attitude for everyone she met. Beth was born on August 5, 1935 to John “Ed” and Pearl Marie Hafford in Poplar Bluff, Missouri. She grew up playing barefoot on the banks of the Black River and helping her mother pick cotton, often riding on the cotton sack as her mother dragged it through the fields in the southern heat. Beth went on to marry Glenn Withrow and had three sons. In 1967 Beth and Glenn moved the family to Yakima in search of a better life, in the early 70's they bought land and built a home in Gleed. Following the passing of Glenn, Beth opened a restaurant, The Ozarks, in Yakima, serving authentic southern dishes such as BBQ and catfish. She next returned to college, studying for a job in medicine. Beth was a phlebotomist until she retired. In retirement, she enjoyed tending her flowers and growing a garden, and cooking for everyone. A loving mother and grandma too, This is the legacy we have from you. You taught us love and how to fight, You gave us strength, you gave us might. A stronger person would be hard to find, And in your heart, you were always kind. You fought for us all in one way or another, Not just as a grandma and not just as a mother. For all of us, you gave your best, Now the time has come for you to rest. So go in peace, you've earned your sleep, Your love in our hearts, we'll eternally keep. (Author Unknown) Beth is survived by two sons, Frank (Lola) Withrow and David Withrow; four granddaughters, Marissa Withrow, Amanda (Ray) Maranon, Morgan Withrow and Katrina Withrow; five great-grandchildren, Aiden, Kalaina, Andrew, Jayce and Jazlynn; as well as extended family in both Yakima and Missouri. Beth was preceded in death by her parents, husband Glenn, son Rick Withrow, sisters Lovella Shively and Veda Nagy, brother Paul Hafford, and grand babies Ricky and TJ. Visitation will be held Tuesday, June 14th from 3:00-7:00pm at Valley Hills Funeral Home in Terrace Heights. Graveside services will be held Wednesday, June 15th at 2:00pm at Terrace Heights Memorial Park. The family wishes to thank the staff of Virginia Mason Hospital, Seattle; Northstar Lodge Cancer Center, Good Samaritan Nursing Facility and Cottage In The Meadow Hospice for their dedication in caring for Beth.

Beth Ann Withrow, 86, of Gleed, Wa. passed away peacefully on June 2, 2022 following a long struggle with cancer. Beth was a beloved mother, grandmother, great-grandmother and friend. She always had a kind word and positive, joking attitude... View Obituary & Service Information

The family of Beth Withrow created this Life Tributes page to make it easy to share your memories.

Beth Ann Withrow, 86, of Gleed, Wa. passed away peacefully on...

Send flowers to the Withrow family.